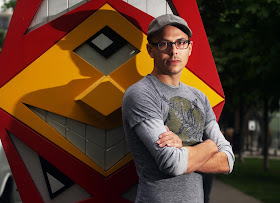 I just googled you and damn dude! You been busy! I will admit I hadn't heard of you until I was looking around and found these book titles:
Bro-Jitsu: The Martial Art of Sibling Smackdown
How to Build a Robot Army: Tips on Defending Planet Earth
How to Survive A Robot Uprising: Tips on Defending Yourself Against the Coming Rebellion

Mind. Blown. I thought, here is someone the Flock can relate too! Then I found you have some best sellers under your belt with Robopocalypse: A Novel, Amped: A Novel, and some short stories including The Executor in The Mad Scientist's Guide to World Domination. AND Robopocalypse is being made into a movie by Spielberg.

Sharon: So my obvious question is: if every time you entered a room a theme song/music played what would it be?
Daniel: Oh my god, what a curse that would be! I’d love to be able to stare off in the distance and have the Lord of the Rings soundtrack play. That would also give me an excuse to buy a sweet cloak.
Sharon: Do you really need a reason to buy a cloak? I think not!
Daniel: You don’t need a reason to buy a cloak, but you probably need a good reason to wear one. 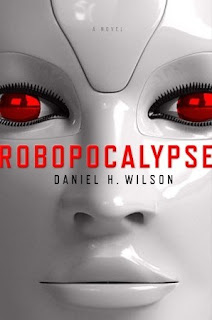 Sharon: You've written best sellers, got your PhD, got a movie deal… what is left that you want to accomplish
Daniel: My life has oscillated between science and science fiction, and I’d like to get back more into the science aspect. Right now I’m working on a super secret project that will combine the two. I have learned that you either use your skills and knowledge or you lose them (which doesn't seem fair).
Sharon: You drop words like “super secret” and give no hints? Does it involve how to build a life like Thor robot? Cause that would be pretty damn super…
Katie: I can pull out the duct tape and start the interrogation at anytime…*holds tape threateningly*
Daniel: No Thor-like robots involved… so you’ll have to track down Chris Hemsworth himself if you want to ogle the six-pack from Valhalla. It’s more boring than that, just a transmedia type of storytelling that will take place on a device and have elements of audio books and video games.
Sharon: *eyes glaze over* Wha?
Katie: No Thor for you today *hands Sharon a tissue*

Sharon: What is the nerdiest thing you own?
Daniel: Easy answer. The nerdiest thing I own is a website that I built from the ground up to give me statistics on my Magic The Gathering decks. The site is at www.deckperfect.com, but I don’t make any money at it and it usually doesn't work.
Sharon: We just interviewed urban fantasy author James Tuck and he has over 10K Magic The Gathering cards! You do have the Rabid Sheep card, right?Daniel: You mean the Rabid Wombat? Tons of them roam through my decks.
Sharon: oh, no... I give you: Flock of Rabid Sheep 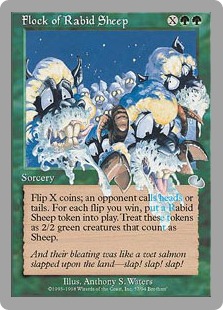 Katie: Favorite Halloween costume you have worn
Daniel: German astronaut. The costume involved a blonde wig and most of the outfit from when I went to Space Camp at age twelve. Suffice to say it no longer fits. 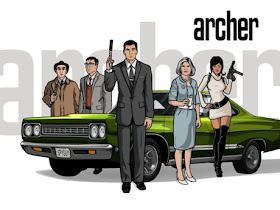 Sharon: What kind of movies/TV do you like to watch?
Daniel: I’m overly optimistic about how much TV I’m going to be able to watch. I set out to watch very serious full series and then I end up watching cartoons and zombies. So, I’m all over anything with H. Jon Benjamin in it, like Bob’s Burgers and Archer. Futurama rarely disappoints. And I hate watching The Walking Dead, but damned if I can’t quit it.
Katie: Hate the Walking Dead? Dude, why?!
Daniel: So much angst. So many zombie dry spells when no undead bother to show up. And way too much good guy / bad guy bullshit. But then, every now and then, pow! The Sheriff will just put a bullet into somebody’s forehead and your faith in the show is renewed.

Katie: Have you ever read a romance book?
Daniel: Does Clan of the Cave Bear count? Because I recall that book series being scandalously X-rated and prehistoric.
Sharon:*facepalm* no, it doesn’t count.
Katie: *Head desk* Wow, just…wow.
Daniel: It’s just that… I thought… I was, uh, joking?

Sharon: Sexiest robot, scariest robot, badassist robot?
Daniel: Maria from Metropolis. The Parasite from Robopocalypse. Mecha with a chainsaw coming out of its crotch from the movie Robot Jox. (Yeah, I named one of my own robots.)
Sharon: I expected nothing less <G> I am off to google Robot Jox for obvious reasons…
Daniel: Now you know never to trust a guy named Tex.
Katie: What the heck is Pinnocchiopunk
Daniel: For a while, Cory Doctorow was fond of putting the suffix “punk” on anything and everything. When he applied it to my short story “The Nostalgist,” I have to say I was flattered to be included in the Doctorow pantheon of punk.

Sharon: If you could have any piece of art in the world in your home what would it be?
Daniel: A partial leg from a spider tank, taken from the set of the Robopocalypse movie. Which hasn't been filmed yet. But hopefully will be. Hurry up, Spielberg!
Sharon: Yeah, Spielberg! (by the way, does Spielberg smell like awesome and money?)
Daniel: Yes. And cookies.
Sharon: I knew it! 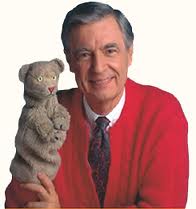 Sharon: Mr. Rogers or Captain Kangaroo?( If you don’t know who they are then Blue’s Clues or Little Bear?)
Daniel: Are you kidding? Mr. Rogers always wins. Plus, I lived in Pittsburgh for years and if I answered any different they would never let me visit again. And I don’t want Daniel Tiger clawing me up either.

Katie: Needle nose or flat nosed?
Daniel: Nail-head biter.
Sharon: Okay, I googled it and I got pages of pictures like this… seriously. Am I missing something? 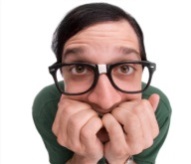 Daniel: Okay, after a search-engine sojourn I’ll say we should amend that to “end cutting nipper.” Which is not as cool sounding as nail-head biter, but just as weird sounding. 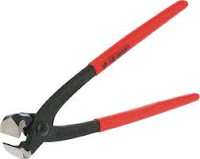 Katie: Moonlight or sunlight?
Daniel: Sunlight. Not enough of it here in Portland. Send some.
Sharon: Katie lives in sunny Bay Area of CA. I’m sure she can hook you up… we’ll talk later.
Katie: No way, we like ours! Take some from Arizona!
Daniel: I want sunlight, not more fog. Arizona it is.

Sharon: Symphony or rock concert?
Daniel: Symphony. My last rock concert ended with a fist fight in the parking lot.
Sharon: aaannnnnd… did you really think you could get by without more details? What concert?
Daniel: Def Leppard concert. Smack talking. I think I walked away the winner, but my jaw didn't close right for a week.

Katie: Coke or Pepsi?
Daniel: I claim Pepsi but I secretly drink Coke.
Sharon: Not sure how I feel about this…
Katie: BOOM! Another win for Coke!
Daniel: And I only drink the little bitty cans. Because my god, soft drinks are terrible for you.

Sharon: Grits or oatmeal?
Daniel: Oatmeal. With two kids under three, this is a food item more often on me than in me.
Sharon: Don’t worry when they get older, it gets worse.
Daniel: But someday my kids will be spoon-feeding me oatmeal, right? Oh, wait. No, they’ll buy a robot to do that.
Sharon: I see what you are trying to do there... bring this interview back round to robots and you! oh ,wait... <G>

Katie: Monster under the bed or in the closet?
Daniel: Under the bed, with a big hairy arm waiting to swipe my ankles.

Thanks for taking the time to play with us. Is there anything you would like our readers to know before we give you a tour of the dungeon? Upcoming appearances, releases, what is under your bed…
Daniel: My latest novel is called AMPED and it’s out right now! Find me on Twitter @danielwilsonPDX or on my website at www.danielhwilson.com. Oh, and a box full of nintendo games and four well-worn VHS tapes are under my bed: Princess Bride, Dark Crystal, Labyrinth, and The Neverending Story.
Sharon: *getting all teary eyed* You are so cool! Have a moonpie and some Kool-Aid (here are some extra for your kids. Don’t worry they are healthy-ish)
Daniel: Thanks, ladies! 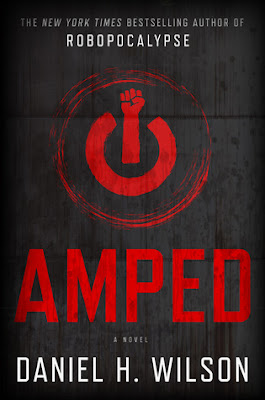 As he did in Robopocalypse, Daniel Wilson masterfully envisions a frightening near-future world. In Amped, people are implanted with a device that makes them capable of superhuman feats. The powerful technology has profound consequences for society, and soon a set of laws is passed that restricts the abilities—and rights—of "amplified" humans. On the day that the Supreme Court passes the first of these laws, twenty-nine-year-old Owen Gray joins the ranks of a new persecuted underclass known as "amps." Owen is forced to go on the run, desperate to reach an outpost in Oklahoma where, it is rumored, a group of the most enhanced amps may be about to change the world—or destroy it.

website-FB-twitter
Daniel H. Wilson is the author of the New York Times bestselling Robopocalypse and seven other books, including How to Survive a Robot Uprising, A Boy and His Bot, andAmped. In 2008, he hosted The Works on the History Channel. He earned a PhD in Robotics from Carnegie Mellon University, as well as Masters degrees in Artificial Intelligence and Robotics. His novel Robopocalypse was purchased by DreamWorks and is currently being adapted for film by Steven Spielberg. Wilson lives in Portland, Oregon.