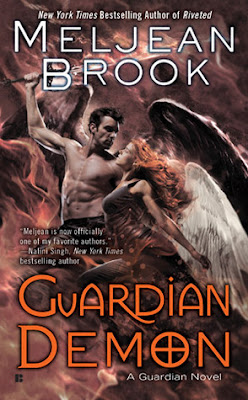 In this thrilling conclusion to the Guardian series, New York Times bestselling author Meljean Brook delivers another stunning page-turner, in which the fate of humanity depends upon a tortured warrior winning the trust—and heart—of the woman he wounded…

After a terrifying encounter in Hell destroys her trust in Michael, the Guardian’s powerful leader, former detective Andromeda Taylor is ready to call it quits as one of the angelic warriors and resume her human life again. But when demonic forces threaten her closest friends and she uncovers a terrifying plot devised by Lucifer, Taylor is thrown straight into Michael’s path again…

To defeat Lucifer, Michael needs every Guardian by his side—and he needs Taylor more than any other. The detective is the key to keeping his own demonic side at bay, and Michael will do anything to protect her and keep her close. And when Taylor manifests a deadly power, her Gift might tip the scales in the endless war between Heaven and Hell…or it might destroy them both with a single touch.

As the far as paranormal romances go, Guardian Demon is definitely a hit. As the last book in the Guardian series, it had a lot riding on its shoulders. From what I gather from chatting with fans of the series, Michael's story has been anxiously anticipated. Once again, I jumped in late. Having not read the previous books in the series I can say that towards the ending I was insanely confused about who was who, who had a mate and who didn't, who was good, who was evil, and who was pretending to be good in order to buy themselves time.

So no, I would not recommend reading this book as a standalone for one main reason, as much as I liked Guardian Demon, I felt like I missed out on the journey to this point, this final book in what is a well developed series. I missed getting to know the characters, Michael especially. He's such a dominant character with such a strong influence that it was almost impossible to see any one as his equal, let alone his mate. It was interesting to see author Meljean Brooks provide emotional growth to a character who has lived for thousands of years, has seen and done everything yet still had some very important things to learn. She managed to take a hardened warrior and make him vulnerable, giving Michael more depth and keeping him from becoming stale. As a centuries old warrior he is respected and feared by many, but he's never met a woman like Andromeda Taylor.

Taylor's had quite the wake up call. One day she's just a normal human detective and the next she's a warrior with a deadly ability. Still feeling betrayed by Michael, she's the only one who can reach and bring him out of Hell. As a Guardian she has some extra benefits that she didn't have as a human, but she doesn't have time to get used to her new status before hell literally breaks loose. If that's not enough for her to deal with, she's going to have to spend a lot of time around Michael and she can't decide if she hates him or not.

Michael and Taylor definitely set off some serious sparks but their relationship isn't at the core of the book. In fact, Guardian Demon is more about the events leading up to the battle with Lucifer but when the focus does shift to Michael and Taylor, look out because those scenes are scorching hot!

Now, in my opinion, a paranormal romance isn't a paranormal romance unless there's at least three violent, bloody scenes that make my eyes want to roll up into my head with how graphically they are depicted. Guardian Demon definitely qualifies as a paranormal romance. I thought my eyes were going to stay stuck up inside my head by the end of the book. There were bodies flying left and right and I loved every minute of the final battle scene!

With so much going on in Guardian Demon it can get a little confusing for the first time reader so make sure to start with book one in the series. If you're a longtime fan, then this book will not disappoint. 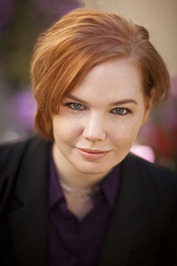 website-FB-twitter-blog
Meljean was raised in the middle of the woods, and hid under her blankets at night with fairy tales, comic books, and romances. She left the forest and went on a misguided tour through the world of accounting before focusing on her first loves, reading and writing–and she realized that monsters, superheroes, and happily-ever-afters are easily found between the covers, as well as under them, so she set out to make her own.

Meljean lives in Portland, Oregon with her husband and daughter.