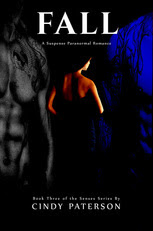 Fall (The Senses #3)
By: Cindy Paterson


“He’s destroying me—us. I need him like my next breath, yet I’m suffocating.”

An unrequited love that has ripped her to pieces.

Delara has loved Waleron for over a century. Their intense chemistry is sensual, gripping, irresistible. But tragedy struck, and after sixty-one years of believing he was dead, Waleron returns a tortured man. He claims the man she loves is dead, yet the undeniable sexual tension still pulls them together.

“I am no longer the man you love, maitagarri. I am incapable of it.”

Waleron has given his oath to protect the Senses. He will sacrifice everything for them. But there is one Senses he has vowed to protect more than any other—Delara. He will do anything to make certain she is safe, even if it means he must deny her the love they once shared.

She is the hunted.

Delara’s life is in jeopardy and Waleron will do anything to protect her. But he never suspected that Xamien, the man he brings to help protect her is way more important to her than he ever knew.

Torn between two men and hunted by another, Delara must fight her hardest battle—herself.

FALL can be read as a stand-alone, however it is highly recommended to read the 1st two books to completely understand the love story.

After living centuries, both Delara and Walerson have done things that makes you want to slap them both, then turn around and hug them both.

Thinking the man Delara has loved for over a century is dead she is shocked when he returns after sixty-one years. Waleron is tortured and claims he is not the same man she was in love with. Yet he cannot deny the sexual tension between them even though he tries.

Waleron gave an oath to protect the Senses, Delara is one of those senses and he has to keep her safe.

Enter Xamien… a yummy alpha male who means more to Delara than Waleron realizes. Written as a stand-alone book, the story of Delara and Walerson plays out through the series in books one and two. Unfortunately I did not get to read these two books and wish I had read about the rough history they had gone through. With that being said, I still enjoyed their story and how well the author wrote it. They are meant to be together, but can they make it work or would they be better apart? An emotional roller coaster all the way! She must choose between Waleron and Xamien while battling her own demons within herself. 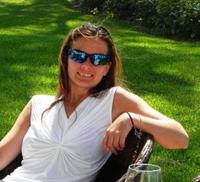 About the Author:
website-FB-twitter
I am Xamien's secret lover. Well, in my head I am and since I'm single this is completely allowed. Some of you may ask, who is Xamien, don't worry you will meet him soon enough, but no falling in love with him. He is all mine.

Writing books is a fantastic way to have adventures that are impossible to have otherwise. I mean do you really want to fall in love with Waleron? He is so unstable and would never pick up after your dogs or clean the litter box. Not to mention the fact that he is always out killing disgusting grave robbing bug people.

Curling up with a good book and losing yourself to another time and place is the greatest reward. Being able to feel a character's emotions, their fears, pain and love. Now that is incredible. I relish in the books that stay with me long after they have ended. This is what I strive for in my writing. To give the readers, and myself, an escape into another world, my world.

I have been writing since I was twelve. My parents, sorry mom and dad, would send me to my room for an hour every night to do homework, and instead I wrote stories. Oops, guess that is why i did so bad in math.

I have never stopped writing since then and never will. It's like an addiction, but a good one. I adore stepping into the shoes of a character and deciding their fate. The characters are why I write. I want to fall in love with them (even the bad ones), so that I care about what happens to them in a story. If I can't care about the characters then why bother with the story.

I live in Toronto with a menagerie of pets that keep me on my toes.