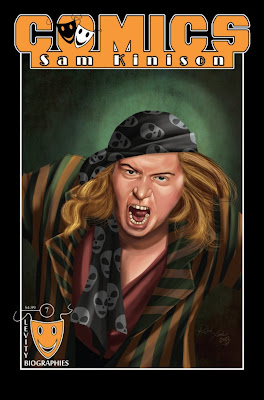 
Sam Kinison was the most controversial comedian of his time, earning the ire of his critics and respect of his peers. Comics: Sam Kinison: Explores his rise from his humble roots as a preacher, to the excesses of his life as a Rock and Roll Comedian and his tragic death.

How about a comic book dedicated to a stand-up comic? Heck, why not? On it's face, I can't imagine it hasn't been done before. If it has been done before, however, I most certainly can imagine it was done much better than this.
Despite being a fan of stand-up comedy, I've never really been a huge fan of Sam Kinison. I basically remember him for his bloodcurdling screams. There was definitely an aura about the guy, though. A bigger than life kind of character that was custom-made for the '80s. It really is astonishing a bio-pic hasn't been made yet, but there's yet to be a bio-pic of Richard Pryor either, and between the two I would much rather watch a Pryor movie.
Anyway, back to the comic book.
The story of Kinison's life is looked at through the conceit of a wannabe comic in present day who has never heard of Kinison. From there, the highlights and lowlights of Kinison's life are laid out in chronological order with all the flare of a Wikipedia entry.
Honestly, there's not much more to the book than that. Just a lot of trivia tidbit strung out atop some of the roughest illustrations I have ever seen in a comic book. I mean, if you thought the artwork behind Beavis and Butthead was rough around the edges, just wait until you check this book out. In a weird way, it kind of compliments Sam Kinison's surreal, downward spiral in life. But after a few pages it irritates the eyeballs.

There's simply not enough to this book to hold interest, which is too bad because if there had been a more dramatic approach to the subject matter, Sam Kinison's life would be great fodder for a comic book series. As a stand-alone bio, however, it's severely lacking.