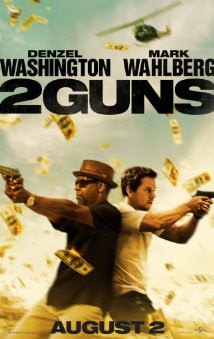 2 Guns (2013)
Director: Baltasar Kormákur
Writers: Blake Masters (screenplay), Steven Grant (based on the Boom! Studios graphic novels by)
Stars: Denzel Washington, Mark Wahlberg, Paula Patton
109 min - Action | Comedy | Crime
2 August 2013 (USA)
Official website
A DEA agent and a naval intelligence officer find themselves on the run after a botched attempt to infiltrate a drug cartel. While fleeing, they learn the secret of their shaky alliance: Neither knew that the other was an undercover agent.

This was a good old fashion blow’em up cop action movie. I love Mark Wahlberg and Denzel Washington. They had great on screen chemistry with Denzel playing the straight guy to Mark’s crazy much like Lethal Weapon. One thing to be mindful of, the trailers play up the comedy aspect of the movie, and there is a lot of comedy, but it is also a drama. I liked how the story kept me guessing. You aren’t sure who the bad guy is till near the end. Then there is all the blowing stuff up in slow motion parts, which is an action movie staple. 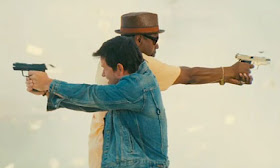 You don’t need to see this at the theater to enjoy, but if you are looking for some entertainment away from the summer heat outside, this will satisfy.