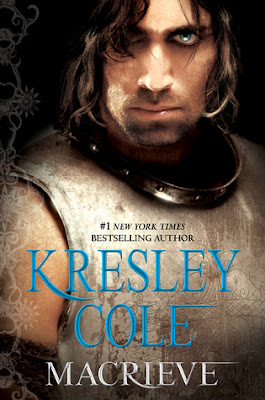 Plot:
A BEAST IN TORMENT

Uilleam MacRieve believed he’d laid to rest the ghosts of his boyhood. But when a brutal torture revives those ancient agonies and destroys his Lykae instinct, the proud Scot craves the oblivion of death. Until he finds her—a young human so full of spirit and courage that she pulls him back from the brink.

A BEAUTY IN CHAINS

Seized for the auction block, Chloe Todd is forced to enter a terrifying new world of monsters and lore as a bound slave. When offered up to creatures of the dark, she fears she won’t last the night. Until she’s claimed by him—a wicked immortal with heartbreaking eyes, whose touch sets her blood on fire.

A FULL MOON ON THE RISE

With enemies circling, MacRieve spirits Chloe away to the isolated Highland keep of his youth. But once he takes her to his bed, his sensual mate becomes something more than human, evoking his savage past and testing his sanity. On the cusp of the full moon, can he conquer his worst nightmare to save Chloe…from himself?
***I tried to keep this as spoiler free as possible, read with caution***
Unlike previous Cole books, MacRieve switches gears with the main focus on the lead male and female. You get a little taste of previous characters, but it's a dash here and there. The brunt of the story is, to sum it up, a deep look into the emotional scars that abuse and child molestation can leave behind. A topic that should be addressed, but left me wanting more "umph" in the overall plot.
I've said it before and I'm saying it again here, Cole is a brilliant writer and one who has spoiled her readers. We are not beneath throwing a tantrum when we don't get our way. There was a major action-adventure dynamic that was missing this time around. No continental scavenger hunts or life or death treks across the globe to save someone. This installment is very stationary. The romance is there, but that's NEVER a problem with Cole's characters! Never.
I've got a special place in my heart for the wolves in this saga, I may even love them more then the vamps. (Which is saying something for the diehard vamp lover) These guys and gals are written in the greatest possible way. So far, each wolf male has been paired with a female from a race they despise. And through this earth shattering bond with their "mate", it forces them to overcome prejudice and find love. This story was best displayed in A Hunger Like No Other, I LOVE Lachlain and Emma and can read their story over an over! But MacRieve feels like a sale priced version of the same story.
Chloe is a strong character, as such I did not believe that she wouldn't walk out on Will and all his hoo-ha nonsense about her being the cause of all his pain. I get it, he was molested by someone of her race, but it was NOT her. She tells him this time and again, but sticks around anyway. The Lykae might have hunted her down sure, but damn you TRY and get out of there. He was her whipping post and it got old after the third time he yells at her for something out of her control. The care and nurture that has been shown in previous characters was missing this time around. Chloe was written in a fashion that may have reflected an interpretation of love, but love was not the message I received.
Overall there's more build up to the lore Accession, which I hope happens before I am old and grey because I really need to know how that turns out. I can't wait to see all these guys and gals kicking some butt! Nix is absolutely the mastermind of the whole saga and rightly so. She alone keeps me sucked into this fantastical world.
The best part of this series for me is the interchanging web of stories. Demons one book, sexy wolfs the next and then maybe some sassy witches. It's such a beautiful woven tapestry of tales that you never know which one you'll get next and where it takes place in the overall timeline. This saga can be picked up at any point, but the fun is in the journey!

I trust with every fiber of my being in Cole, and will absolutely continue to follow all of her stories. No "but" on the end of that sentence. However, I recommend that you prepare yourself for this one and check out what other reviewers are saying.
Looking forward to Cole's other series Endless Knight which hits shelves October 1st 2013!

Getting 3 and 1/2 'Lykae countryside' Sheep
KD