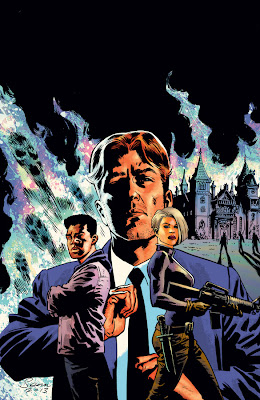 A HORROR/CRIME MASHUP THAT'S EQUAL PARTS OCEAN'S 11 AND THE SHINING. Jackson T. Winters is one of the greatest criminal masterminds to ever live...except he's rotting in jail after his last, doomed score. But when a filthy rich collector breaks him out, he's tasked with putting together an elite team of paranormal experts to do the impossible: Steal a ghost from a haunted house of horrors!

Credit Joshua Williamson and Goran Sudzuka with offering one of the most unique starts to a haunted house story: a bloody prison break. I read this issue cold, with no idea what it was about, initially thinking it might be some kind of gangster revenge tale only for it to quickly twist into a cross between Ocean's Eleven and The House on Haunted Hill.
As far as the plot goes, it takes a bit of a leap on the part of the reader, because it's just so out there. A plutocrat collector of the paranormal wants a ghost from a mansion scheduled to be demolished, so what's he do? Well, hires a beautiful assassin to bust a lowlife thief out of prison so the thief can recruit a motley crew of miscreants to track and capture said ghost. It's a little bit bonkers, but the intro and cliffhanger of this first issue make it really enticing, despite the motivations of certain characters not making a lick of sense.

The team of disparate characters is oddly charming in its way, with an over-the-hill stage magician, a couple of reality TV ghost hunters, and a medium to the stars as key players, there is bound to be some comic relief to go with all of the action and horror.

The book has attitude and style to spare, but it's going to take the second issue, I believe, to bring everything together and keep readers engaged. The mish-mash of genres is fun and has a lot of promise. I just hope it can deliver as the stakes are raised. I will say that the way this debut leaves off, with the team finally inside the mansion, has me eager to see what happens next.