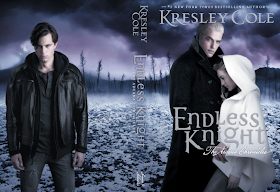 Evie has fully come into her powers as the Tarot Empress, and Jack was there to see it all. She now knows that the teens who’ve been reincarnated as the Tarot are in the throes of an epic battle. It’s kill or be killed, and the future of mankind hangs in the balance.

With threats lurking around every corner, Evie is forced to trust her newfound alliance. Together they must fight not only other Arcana, but also Bagmen zombies, post-apocalyptic storms, and cannibals.

When Evie meets Death, things get even more complicated. Though falling for Jack, she’s drawn to the dangerous Endless Knight as well. Somehow the Empress and Death share a history, one that Evie can’t remember—but Death can’t forget…
Sometimes, you think you know a writers MO. Their style, characters, snark, etc. What's to be expected when you open a new novel. It can all become very mundane and tiresome at times. Then, out of the blue, an author comes along with something fresh and intoxicating. Something so incredible, you have absolutely no idea how you lived a second of your very long life without THIS story. Endless Knight and Kresley Cole is that combo!
I'm not a fan of Young Adult books, I am a fan of well written enticing books and Cole brings that to the table in tarot spades! Hands down, one the best stories I've read this year or perhaps my whole life. From the first sentence, I was hooked like a back alley addict. Pump my veins with the lifeblood of these characters and never stop!
I will implore you to read book 1 (Poison Princess) before you get into book 2. These precious jewels should absolutely be experienced in chronological order.
You think you know Evie? Think again. You think you know Death? Think again! Everything you thought you knew is blown away. Each character has exciting vibrant aspects and I was totally refreshed and utterly irritated at the same time. I've become invested in these characters beyond words or normal, rational reaction. To me, they are real. Deal with it.
Take a close look at the cover flat above, this truly speaks volumes about what's to come.
Jack, Jack, Jack! What has this man gotten himself into? *shakes head* He's the wild card, I think. You never know what side of the fence he will land on. A beast through and through, but one with heart and passion for the woman he craves.

Though this fragile relationship has always been rocky, there is something that pulls the two tighter. All the while we have her band of merry men, still set on the mission to kill Death and find Evie's grandmother. The task at hand seems so large with so many different players stepping into this apocalyptic game.
Will the good guys win against all odds? Can the game end without a bloody slaughter? I don't know! But by the gods, I want to know!!!
Enter that sexy male named Death. There is a whole new element to that man, freaking blew me away. The twists and turns are shocking, then heartbreaking. Then shocking again! Why, oh why, does Cole do this to me?! Why does she add such drama into her stories that I can't sleep until I've finished them! I love her so much I want to eat her books. Consume them into my body and let them soak for all my days.
Read this story. I don't care who you are what genre you usually read, this is one you wont regret. Book 3 needs to be in my hands, like tomorrow! I don't whip out the big guns often, but this series deserves every sheep we have.

Getting 5 'Death can touch me any day' Sheep
KD
Katie Dalton at 6:00 PM
Share