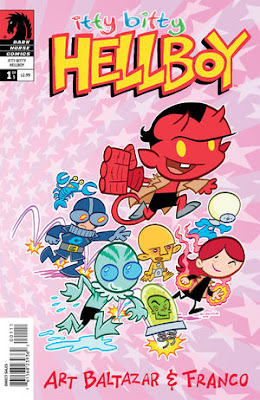 Preview
A ghost named Rasputin has been spotted! And Hellboy and the B.P.R.D. are going to find out what he’s up to.

Who is Hellboy anyway? Why does he have such a big hand and what is it used for? Who's weirder, him or his friends? What is the B.P.R.D.? And what does chicken soup have to do with all of it? This and more answered in the debut issue, where BIG things happen to itty bitty Hellboy!
* The creators of Tiny Titans, Superman Family Adventures, and Aw Yeah Comics comes to Dark Horse!
* A new kids’ comic with Mike Mignola’s characters reimagined by Art Baltazar and Franco!

I first got into the Hellboy character after seeing the Benicio Del Toro film. The imagery, the action, and the characters were just hypnotic on the screen. Then I got the chance to check out a few graphic novels, gaining an appreciation for Mike Mignola's art style, which really suited the Hellboy universe to my way of thinking. Then I heard about this new kiddified version set to debut this year called Itty Bitty Hellboy. I was skeptical. As it turned it, I needn't have been.
Art Baltazar and Franco join forces again with Itty Bitty Hellboy and turn the big red badass into the cutest wittle so-and-so. Forget world domination, the apocalypse, or any of that cataclysmic malarkey. No, this Hellboy is more interested in his cardboard fortress and playing with his friends, while the bad guys are preoccupied with finding a bigger box. Hijinx inevitably ensues. Where Mignola created an awe-inspiring anti-hero, Batlazar and Franco have created an anti-Calvin & Hobbes. The book is made up of two- or three-page vignettes. Kind of like the fare you'd find in the Sunday comics. It's punchy, which rather suits Hellboy don't you think, and doesn't take itself seriously even in the context of an all-ages comic book. It avoids being sacchrine thankfully, while keeping the fleeting violence and ludeness to a very clever G-ratedness.

Do this with Batman or another of my beloved childhood heroes, and I might consider it an affront. Itty Bitty Hellboy #1 charmed me into submission, though. I couldn't help but look at the first page and smile, and keep smiling until I reached the last and realized I now have to wait until Itty Bitty Hellboy #2.