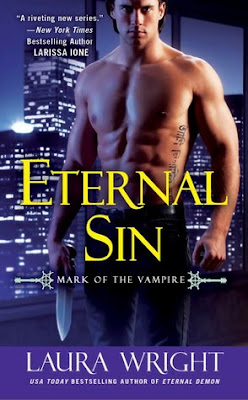 Eternal Sin (Mark of the Vampire #6)
by Laura Wright
Love and Vengeance...

The violent attack left Synjon destroyed and his lover dead—at the will of the evil vampire Cruen. Syn’s passionate savior was Petra. When she became pregnant with his child, it should have been a blessing—until Syn vanished after discovering the truth: Petra was the daughter of the man he despised above all others. The daughter of Cruen.

When Petra’s health begins to decline, she contacts Syn to help save their baby. Though reluctant to see Petra, he cannot turn his back on his own innocent child. But night after night, as his feelings for Petra are rekindled, Syn becomes increasingly torn.

Although everyone assumes that Cruen is dead, Syn is not convinced—and is still hell-bent on finding and destroying him once and for all. But will his thirst for vengeance keep him from seeing what is really worth living for before it is too late?

What's better than a sexy vampire? A sexy vampire with an accent! I hate to say it but, Lucian Roman now has to share the top spot on my "Vampire Hunks" with Synjon Wise. Leave it to me to have the hots for two vampires who have an antagonistic relationship with one another. Eternal Sin has a lot going on but never once does it lose a reader, especially a super fan like myself. I can honestly say I devoured this book quickly and then went back to re-read it several times. What can I say? I developed a crush on Syn from the minute he opened his mouth and that sexy accent came through.

Syn and Petra's story actually began in the novella Eternal Beauty but alas it didn't end on a positive note. Now in Eternal Sin, they both have some big obstacles to overcome, including the fact that Syn willingly had his emotions drained out of him by Petra's father and one of the villains in the series, Cruen and that Petra is now about seven months pregnant with Syn's child. Without his emotions to cloud the situation Syn has become the jerk he always thought he was and so Petra tries to only see him as a necessary food source for her and her unborn baby. There's drama, conflict, humor and of course, passion. The sexual tension between Syn and Petra never fades, it builds and this book doesn't disappoint with the love scenes either. I think Laura's trying to turn her readers into puddles of hormones. I'm not kidding, just when you think the love scenes can't get any hotter she gives this particular reader a whole new reason to sit in front of a fan with ice cubes.

Laura Wright never disappoints with this series and I have to say that Eternal Sin is the best book yet and I'm not just saying that because Syn is one sexy SOB. I really like the turn the series is taking, introducing the world of shifters further as well as exploring the lives of Phane, Lycos and Helo, the vampire/shape shifter hybrids. I didn't feel like I was being overwhelmed with the new characters and the whole new world that is being brought into the series. I hope that Petra's shifter brothers Sasha and Valentin will appear in future books because they're so funny and their loyalty and love for Petra just made me love them.

Can I also say I have the tiniest bit of a girl crush on Dani, Petra's hawk shifter BFF? She's tough, sarcastic, blunt and loyal, all qualities that make for a sexy heroine. I'm hoping she gets her own book and soon.

Yes, Eternal Sin can be read as a standalone but really, why would you want to miss out on all the sexiness of the previous books? That's like having wine without the chocolate cake. 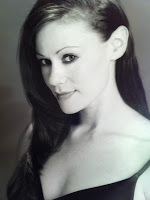 
Website / Facebook / Twitter / Goodreads
Author of the Bestselling Mark of the Vampire series, Laura Wright spent the early years of her life immersed in the worlds of singing, acting and competitive ballroom dancing. But when she started writing, she knew she’d found her true calling. Laura lives in Los Angeles, California with her husband, two children, three dogs, two frogs and two fish. She’s been thrice nominated for a Romantic Times Reviewer’s Choice Award, and loves hearing from her readers.