Book Review: The Five Deaths of Roxanne Love (Beyond #1) by Erin Quinn 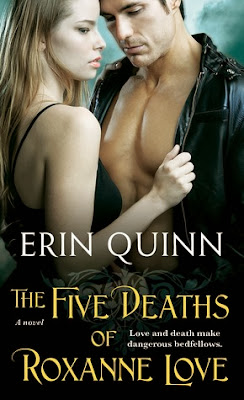 All Roxanne Love has ever wanted is to be normal—marriage, kids, the life of June Cleaver. She tries to fit in but can't conceal her ability to defy death--not from the world, not from the darkest creatures of the Beyond and not from the Reaper determined to destroy her. Now Roxanne is on the run, her only ally a compelling, dangerous detective with secrets of his own. Against her will, she's drawn to his quiet strength and heated touch. But can she trust him with the truth?

Incognito as guilt-ridden cop, Santo Castillo, the Reaper's plan is simple: get close to Roxanne, uncover the secret of her immortality and cut it at the source. Yet with this borrowed body come emotions the Reaper hadn't expected. Now nothing is clear but his conflicted desire to protect the woman he came to kill. As destiny forces them to face an enemy hell-bent on using Roxanne to wipe out all of mankind, she and Santo must choose between love....and salvation.

This book wasn't what I expected in a PNR! And I mean that in a good way. The reason I love urban fantasy is the darkness you find there. PNR usually skirts around the edges of shadows, but Erin Quinn went full force into it with her latest release, and I was running right behind her.

I don’t want to scare off the regular PNR readers, there is still a heavy PNR feel to the hero and heroine’s story and they get their HEA, but the collateral damage is harsh. The balance of good and evil is at stake and Roxanne and her brother are at the crux. I was actually surprised by the turn of events at the end of the story, even though it made sense. It was nice to see a PNR author go “there”. Can’t get more detailed or it will ruin the ending.

Roxanne and Santo are great characters who grow a lot during the story, but it is Santo who takes the prize. He is a reaper of souls and very low on in the demon hierarchy. He is neither bad nor good, just driven by the need to take souls. He's tried to reap Roxanne’s soul multiples times, but she always gets away. He decides to break the rules and possess a human body to discover why she can’t die, and finally reap her. Watching Santo go from an emotionally void creature to a human was amazing. I could feel his struggles and pain as his emotions for Roxanne were given substance.

The secondary characters are well developed even though some only play a small part. There are many sub-plots which get expertly woven into each other by the end. There is suspense, page turning action, heart breaking realizations and yes, there is hot sex <G>.

I recommend this book to anyone who loves suspenseful PNR with a dark edge. If you aren't one for the dark side I think this would be a great chance to spread your wings and step out of your comfort zone. 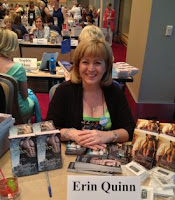 About the Author:
website-FB-twitter
Erin Quinn is an award winning author who writes romance for the thinking reader. Her books have been called “riveting,” “brilliantly plotted” and “beautifully written” and have won, placed or showed in the Booksellers Best, WILLA Award for Historical fiction, the Orange Rose, Readers Crown, Golden Quill, Best Books, and Award of Excellence.

She lives in Arizona with her husband, two daughters and three dogs (all of whom have made debuts in her stories—the dogs, that is, not the husband and kids.)

Sign up for Erin Quinn’s newsletter or enter Erin’s monthly contest to be automatically added and eligible for free books.