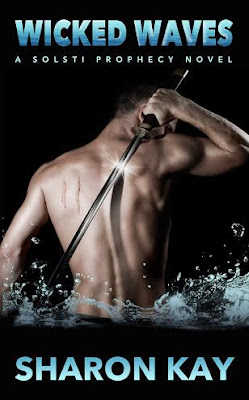 Wicked Waves (Solsti Prophecy #2)
by Sharon Kay
ebook, 355 pages
Expected publication: January 21st 2014
Making daggers out of raindrops is only the tip of the iceberg for Brooke Bonham. As one of four women who can control the elements, her ability to manipulate water packs a deluge of potential. Eager to learn more, she’s frustrated at the precautions she must take to avoid the wrong kind of attention on Earth.

Kai's duties as a Lash demon have kept him busy on Earth for nearly two hundred years. Fighting? He was born to do it. Females? They're drawn to him. And Earth? The perfect place for him to avoid supernatural bounty hunters.

Though the two of them mix like oil and water, Kai senses that beneath Brooke’s frosty exterior hides a vortex of simmering passion. He’s determined to thaw his ice princess.

Forced to work together in the immortal realm, they track a rogue Lash demon at the helm of a widespread kidnapping operation. All too soon, Kai’s dark past catches up to them. Time runs out as a second enemy, bent on revenge, vows to stop at nothing short of Brooke’s enslavement and Kai’s death. As they and their foes stalk each other in a demonic game of cat-and-mouse, will her evolving skills and their fledgling bond be enough to save them?


Kai knows what it's like to be a slave because many years ago he had been caught and brought to the arena where he had to fight other kidnapped slaves just to stay alive. But he escaped with the help of a guard who asked him to kill a slave who raped and murdered his sister. Now, years later the Solsti have returned and he along with the other demons he lives with are trying to keep them safe as well as help them learn how to use their powers. There's something coming, something bad and they have to be prepared for it. What Kai isn't prepared for is Brooke.

Brooke and her sisters have recently learned they are Solsti and they have powers over the elements. Brooke's element to control is water and she's just now learning what she can do with this power. The demons are teaching her and her sister how to defend themselves against the bad demons who would hurt or kill them. There's just one problem and his name is Kai.

I knew right away that I was going to like this book because Kai and Brooke hate each other and always had something snide to say when they were in the same room with one another. You could feel the sarcasm dripping off the walls when they talked to each other and could picture the eye rolls and sneers that they gave to one another in passing.

I love it when the hero and heroine start out hating each other and slowly one of them sees past the flaws of the other because they have the hots for them. That is what happened here with this couple. Kai knows he really messed up their initial meeting and knows Brooke can't stand him but he doesn't know what to do to fix the situation until he realizes that some of those stares she's been giving him haven't been filled with daggers but with lust.

Their budding relationship is really put to the test when they have to travel to the demon realm, Torth. Brooke learns about Kai's time as a slave and she also learns she's more powerful than she realized.

There is another storyline going on at the same time the main storyline is happening. Raniero and Ashina find themselves back together after one hundred years apart. Ashina's father made a deal with Raniero, that he wouldn't kill his daughter if Raniero agreed to be his employee and stay away from his daughter for the time of his forced employment. There's more than meets the eye to these two characters and I have a feeling we'll be seeing more of them in subsequent books.

I've read two books in this series so far and have loved them both and can't wait to see what happens next. If you like your books filled with demons, demon realms, witches, hot alpha males and heroines who aren't afraid to kick some ass when they need too, then this is the series for you. 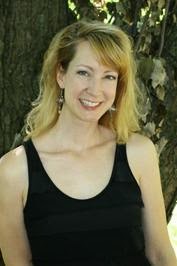 About the Author:
website-FB-twitter
Sharon Kay was bitten early by the writing bug. At age twelve she wrote a short story, about a magic ring, that won a statewide contest. With her nose always in a book, she read the most novels for her age group in her local library’s summer reading program.

In her teens, writing took a back seat to fashion, as she was determined to find clothes different from what everyone else bought at the mall. And what she couldn’t find, she created. She learned to sew, worked in a fabric store after school, and spent her spare time with a needle in hand. Her black and orange prom dress is still one of her favorite creations.

She majored in apparel design in college, spending her summers working in costume shops and bridal boutiques. She worked for ten years in the Chicago garment industry, then switched her focus to apparel production logistics before becoming a stay at home mom.

Sharon lives in the Chicago area with her husband and son, and didn’t expect to write again. But Wicked Wind and the Solsti series formed in her head one weekend and refused to stay quiet until she put pen to paper. Her characters tend to keep her up at night, as they banter, fall in love, and slay endless varieties of power-hungry demons.