*giggle…snort…giggle* This comic series is just so over the top you can’t help but love it. Eric (Quantum) and Woody are now living together so their atoms don’t fall apart. Woody brought along his girlfriend, a clone of an evil villain, and a goat with special powers. Eric just wants to get back to his old life, but he gets tricked and blackmailed into helping an evil religious cowboy. Lucky for Eric, his brother Woody takes a break from being the world’s biggest douchebag to help save the day.
If you like inappropriate humor, politically incorrect snarky dialogue mixed with crime fighting superhero action and goats, then give this one a look. The covers pretty much explain it all, but I included some panels.
Review of issues #1-4 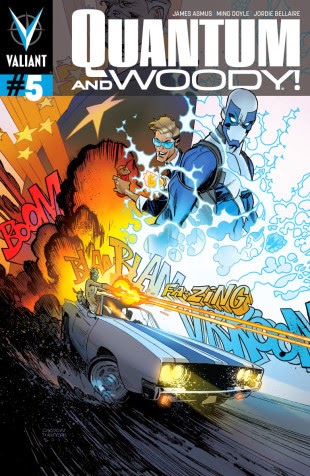 All-new arc, all-new jumping-on point!
All-new…problems?
Eric and Woody have had their lives turned upside down. What do you do when the most annoying person in your life is also the only thing keeping you alive? You move in with him! And his goat. And his barely legal clone girlfriend. Besides, every team of heroes needs a secret headquarters…and this one has a slightly used hot tub. Plus: Quantum meets his first true super-villain!


Attention fans and retailers: Look for the Quantum and Woody Vol. 1 TPB in stores the same day! Intro priced at only $9.99! 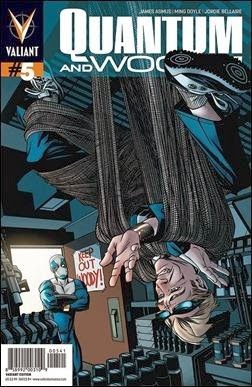 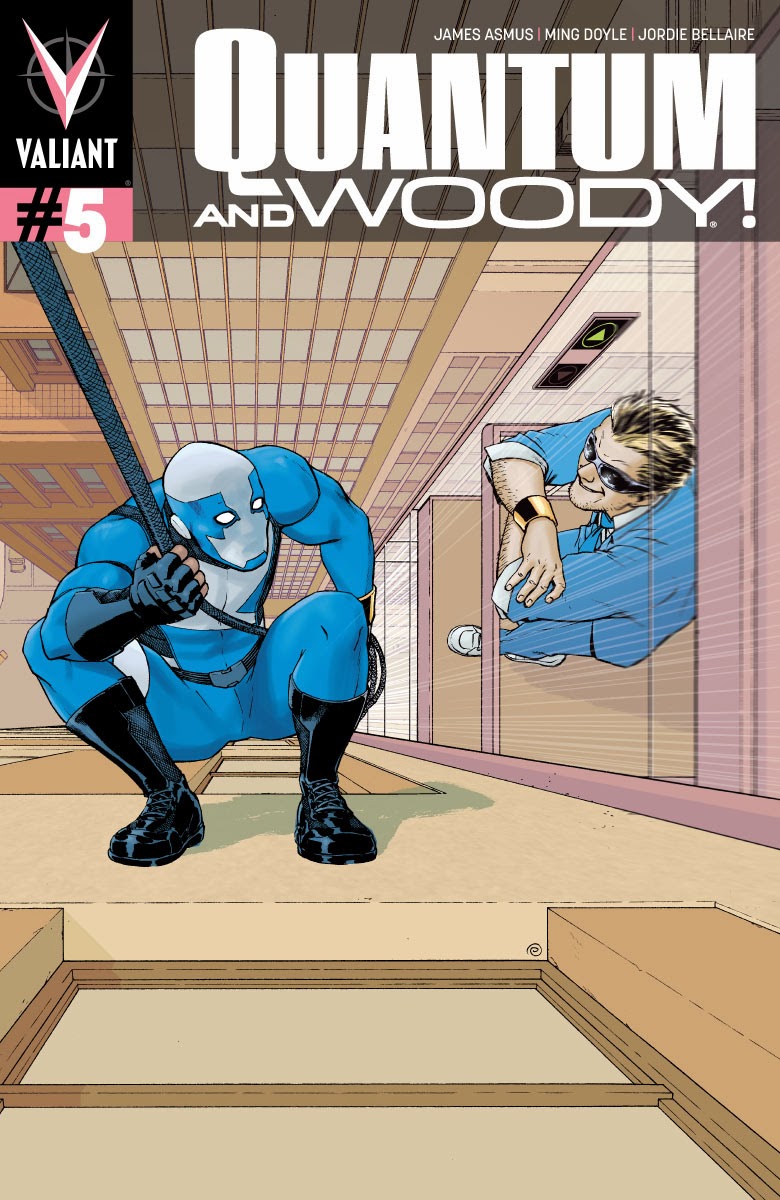 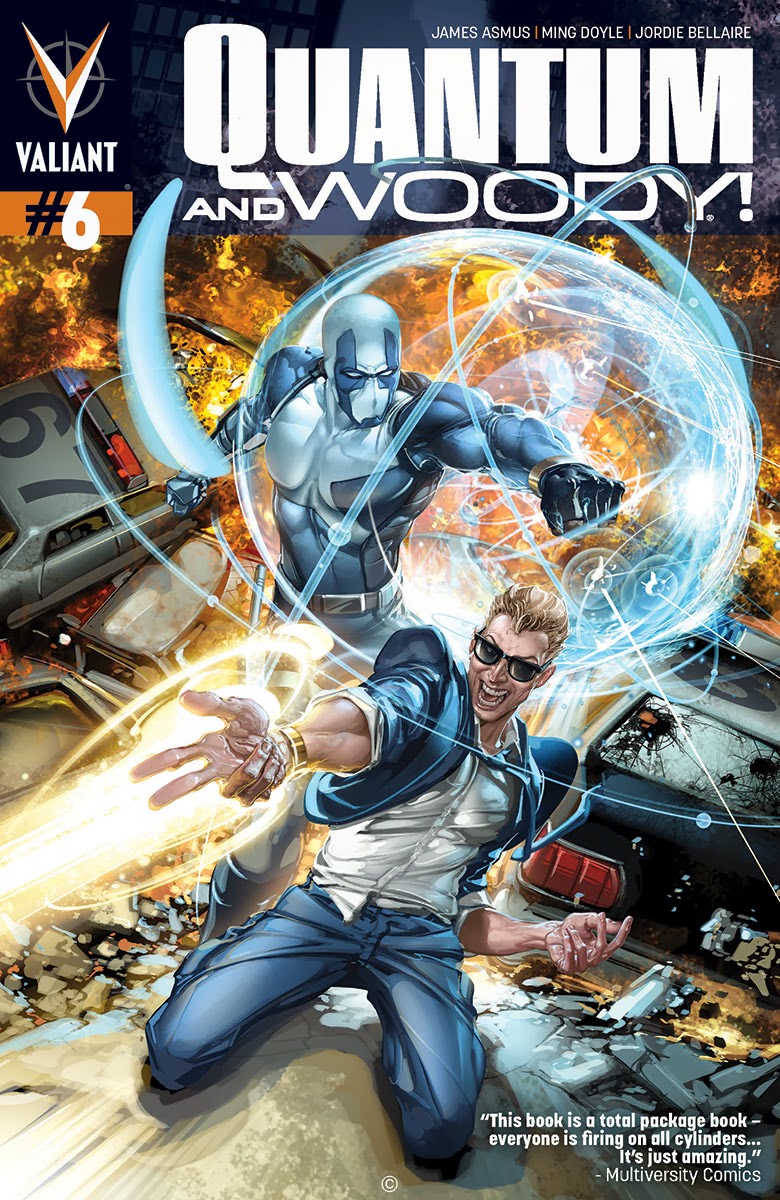 Quantum and Woody! #6
Price: $3.99
Rating: T+
Pages: 32
On Sale: December 4, 2013
Writer: James Asmus
Penciler: Ming Doyle
Cover Artist: Clayton Crain, Kalman Andrasofszky
Editor: Alejandro Arbona
Valiant Comics
Bravely laying their lives on the line!
Unwittingly to uphold the ideals of a multi-billion-dollar private security corporation…Quantum and Woody have blundered into a suicide mission! And if they make it out alive, it only means a whole new world of trouble for our dyadic duo! 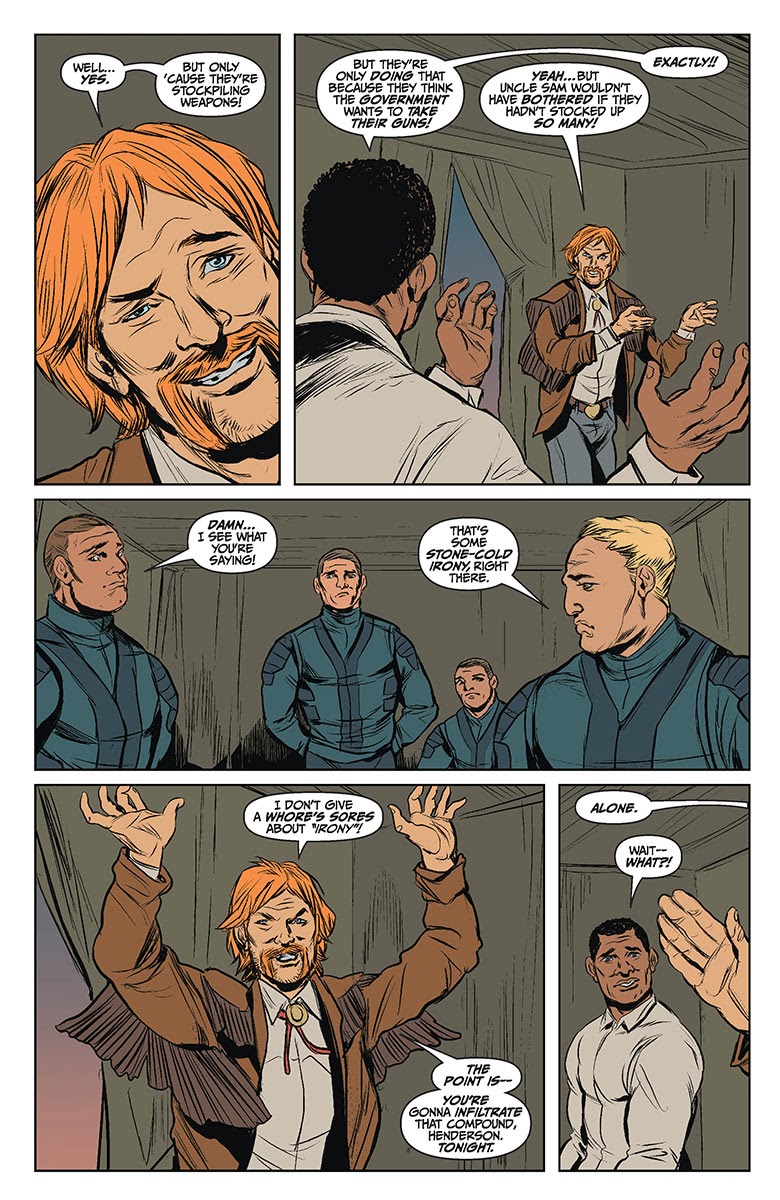 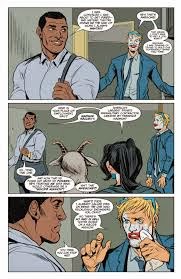 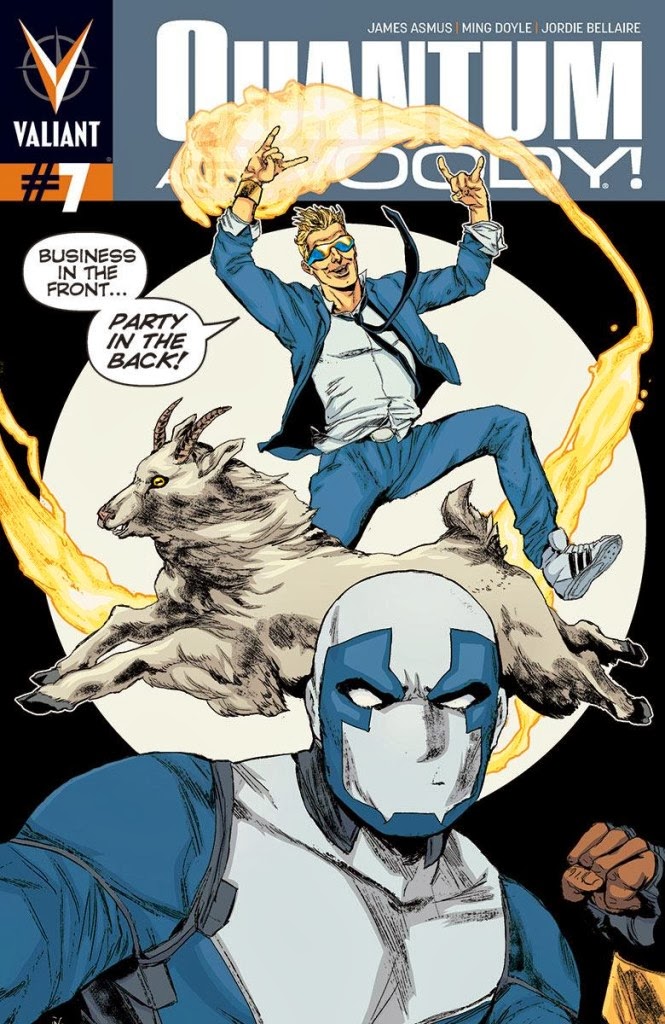 As a totally questionable romance blossoms between Woody and his runaway science experiment girlfriend, Eric finds himself quickly rising through the ranks of his new employers at Magnum Security. But when he comes to find that his duties as an on-staff superhero are bit more unsavory than he ever expected, it’s down to Quantum, an old army buddy, and Woody—interloper!—to discover the illicit truth behind Mr. Magnum’s all-seeing private security empire. 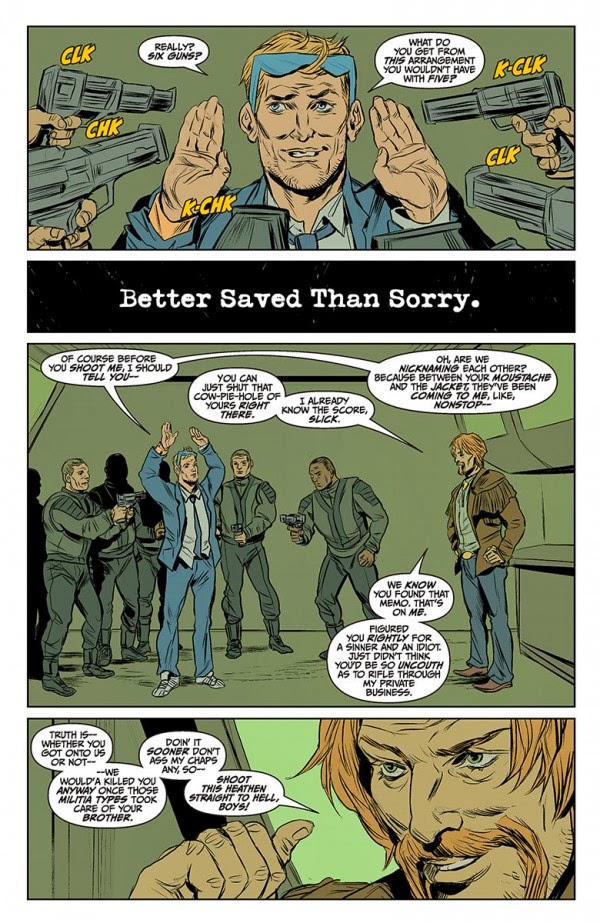 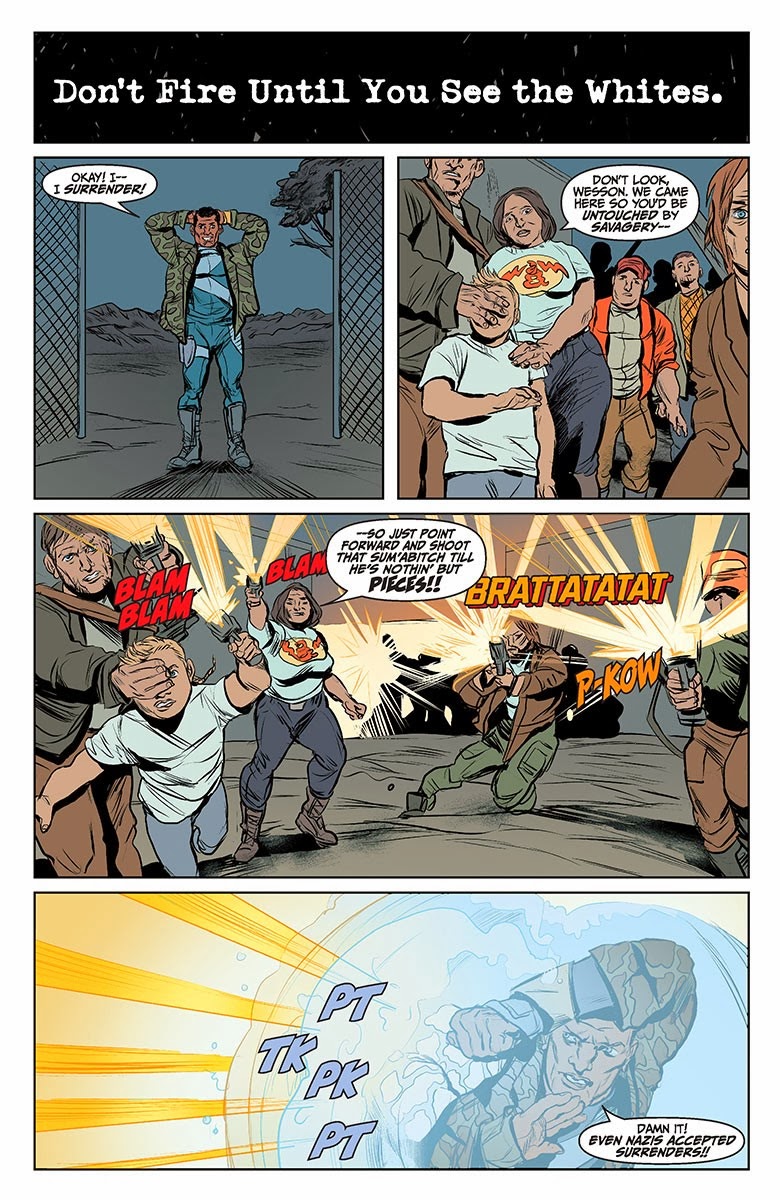 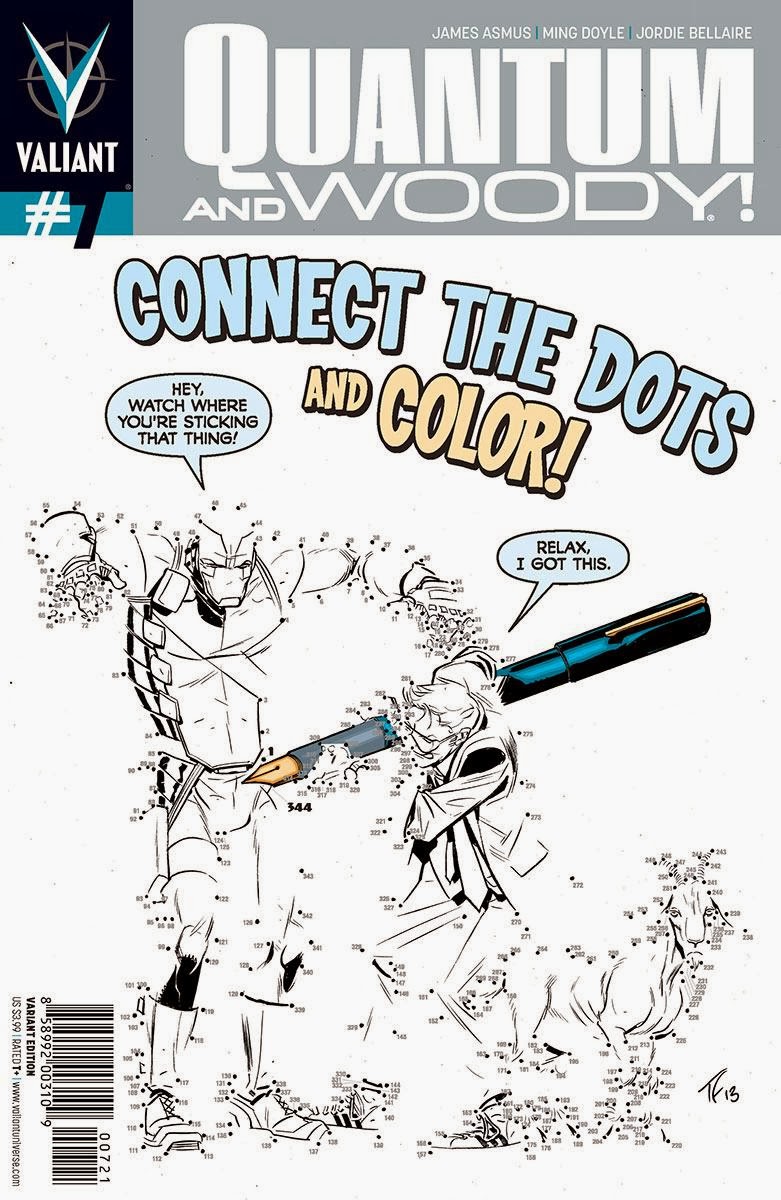 Valiant is a leading character-based entertainment company with a library of over 1,500 characters, including X-O Manowar, Bloodshot, Shadowman, Eternal Warrior, and many more. Established in 1989, Valiant has sold over 80 million comic books, and today its characters continue to be forged in publishing, licensing, film, video games, and beyond. http://valiantuniverse.com/
Sharon Stogner at 8:18 AM
Share