Got something a little different, but still edible. We don't get many human males cooked up at the diner, but we made an exception for this cowboy because...cowboy! Go ahead and take a bite—if you dare—because this dish bites back! *hands out napkins*

Brandon McLemore (Collared by the Cowboy) 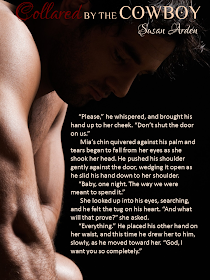 √INVOLVES a road trip
Visit your local Western market and search out one badass cowboy. You know the type: Stetson wearing, pantie-melting, and whip smart comments coming from his totally suckable mouth

Take a moment and enjoy staring into blue flames~ sapphire eyes that is, and his are like two angry oceans ready to set your hunger on F-I-R-E!!

Snap your fingers ‘cause he’s probably checking you out. The man is insatiable when a woman is around. You might have to poke him in his rock-hard chest. Just do it!

Consent to one rule: he has total control over you and in return he’ll bring you to the edge. Again and again.

Choose a safe word. You can trust him…but just in case.

Wear his collar. What have you got to lose except your mind? So what. We’re here to save horses. Right?

√ SERVE HIM BY doing the following

Surrender to him completely

Yank his dark thick hair until it stands up straight.

Kiss him until you both are breathless. Panting and primed.

Relish his skin-scraping stubble along a granite jaw as it skims across your body. SCREAMING ENCOURAGED!

Roll under him in bed for an hour or three.

Ride him like there’s no tomorrow. He likes it rough.

Tell him your secrets and he’ll tell you his.

Unleash his need to protect you, cherish you, and love you like no man you have ever known. Ever imagined.

√ WHAT TO KEEP in mind with a cowboy DOM

Brandon will show up when you least expect it and most need him.

Beware: Brandon is equal parts bark and bite but that’s only because you push him to the brink.


COLLARED BY THE COWBOY
(I SMELL SHEEP exclusive excerpt)

“We’ll need some rules,” he said. “Something we can both agree to. Black and white and in writing.”

“That makes sense,” she replied, her voice coming out hoarse. Suddenly she craved getting closer to him and forgetting about her project, or the fact that they were standing in a sex club. Just put everything aside except their mutual attraction. She tried to stop the shiver overtaking her body, but the more she tensed the more tremulous she shuddered.

“If it’s not the weather, something has got you wound-up. Are you always this easy to excite?” His eyes lowered to somewhere around her mouth.

“Don’t go counting your subs before they’re collared. This is business, remember?”

“If you say so, Miss Santero,” he mocked, and then turned on his heel and went to the bar in the corner. He removed a pad from behind it. “Do you have a pen or pencil?”

“You mean we’re going to write the rules out right now?”

“Is there a better time?” he retorted. “You seem like the type of girl who needs a few rules and some firm reminders.”

She inhaled, refusing to take the bait, and opened her purse. “Here,” she said, crossing the living room.

He began to write, then stopped. “Pink? Who uses pink ink?”

“You didn’t specify a color. Hold on.”

“I can see we’re going to need some time to get adjusted,” he muttered, and held out his hand. “Answer me honestly…how much kink experience do you have?”

“Real face-to-face?” She hesitated, wondering if he’d back out after hearing the truth that hers was all theoretical.

He returned her unblinking stare, then frowned. “Are you tallying? Not asking for names and dates. Darlin’, just round up.”

She swallowed. “I don’t have to. The answer is zero.” She laid a blue pen in his palm and touched his skin. The electrical current zapped her fingertips and flew up her arm. His eyes widened and she knew it wasn’t her imagination.

“This is your first experience outside vanilla sex?” He straightened, and took hold of her arm. “You have had sex, haven’t you?”

A heat wave overtook her. “Yes. Of course.”

“Just checking.” He released her, a muscle twitched along his jaw. Pressing his lips together, he turned his attention to the pad and she leaned against the bar.

“What is this place?” she asked. “One of the private rooms?”

“You might say that.” He turned the pad to her. “There. That should cover it.”

Grabbing hold of the pad, her brows knitted together. Agreement Contract. Rule: What Brandon McLemore deems appropriate stands and Mia Santero will follow. With two signature lines below. “Wait. Are you nuts?”

“I think that rule covers everything that will go on between us.”

“That rule isn’t a rule. It’s a diktat. How am I supposed to abide by a command that gives you complete freedom to do as you see fit? You’ll have all the power…over me.”

“Mia, you asked if I’m good,” he began, incrementally leaning over, until they were less than a few inches apart and he stole the thoughts right from her brain. His gaze sprinted to her mouth, then rebounded to her eyes. “No, darling’, I’m not good. I’m mind-blowing, fan-fucking-tastic. I’ll make it my job to know what you want, but more importantly, what you need. There’s a huge difference, and that’s what distinguishes who commands and who pretends. I don’t pretend.”

“But…” She swallowed, believing every word he said. “You’d have to pretend with me.”

He reached out and cupped her face in his warm hand. “Only until I believe that’s not what you need.”

“Then what will you do?” Her body hummed from the heat in his eyes. “I need to be certain I know what to expect.”

“That’s fair,” he said softly. “I intend on giving you everything until you tell me to stop. Between you and me, there’s something brewing. You said you wanted to be honest. Then let’s. I could fuck you right now. God, I want to, and eventually I’m going to spread your legs, lick and suck on you and then I’m going to make you come like you have never come before, baby. And that’s a promise I intend on keeping.[…]” 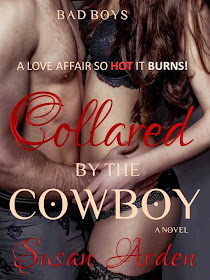 The room at the end of the hall in Spurs & Leather, a private club in Paris hasn't seen any action of late. Brandon as head Dom locked the doors after his last lover burned him good. Diving into his work at Evermore Ranch, he's got his hands filled with taming wild horses until a red-leather wearing woman crosses his path. Tempted back into the saddle, he sets his sights on taming a different type of filly...one with a sassy little mouth, a mind of her own, and hot body that won't quit. He's got the goods, if she willing to let him take the lead both in and out of bed.

Last semester of grad school and all Mia needs is a stellar thesis that will skyrocket her chances of landing a therapist job somewhere far, far away from small towns and small minds. Case studies in female sexuality sure as hell aren't the ticket out of Texas and Mia sets her sights on learning all she can about why women enjoy being dominated--thank you fifty shades of I'm out of here by May! Undercover, she enters the secretive BDSM world within a club known to offer decadent delights. With one minor SNAFU: she becomes the target of the head Dom, a man with a reputation of equal parts bark and bite. When the door marked no is thrown open by one commanding cowboy, Mia can't resist temptation waiting on the other side.

Now, Mia is wearing Brandon's collar, calling him Sir, and loving every minute of being dominated by her powerful lover. Yet Mia can't have her cake and eat it too. Torn, she must decide if her future involves walking away from Brandon when her heart is telling her to stay, stay, stay. 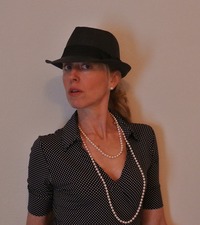 "I love to laugh. More than anything in the world, humor is food for the spirit."