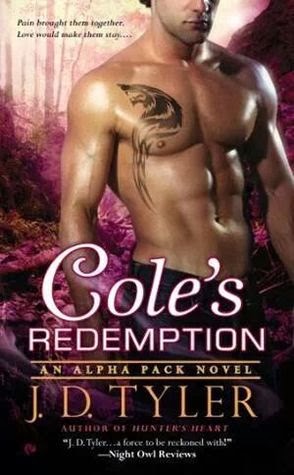 Once, they were Navy SEALS. Now they are the Alpha Pack: a top secret team of wolf shifters with Psy powers who take on the darkest dangers on Earth. But sometimes the greatest danger lies within their own hearts....

Healer and black wolf shifter Zander Cole has survived horrors that would have broken a weaker man. But when a battle leaves him deaf and his powers dimmed, Zan is devastated. Believing himself to be a burden to his team, he sees only one option: leave the Pack forever.

White wolf shifter Selene Westfall knows pain—she is certain her father was responsible for her mother’s death. And she lives to exact revenge. So when she is challenged by a savage black wolf, she puts up a vicious fight—only to become the black wolf’s Bondmate as a result of his bite.

Two damaged souls—one filled with hatred and one who’s lost his reason for living—are forced together as they come to terms with their unlikely, turbulent bond. A love neither expected may be all that stands between them and a killer trying desperately to keep the past dead and buried.

This is the first time I’ve ever read Tyler’s work and to me, it was worth my time. It’s clear that the author took plenty of time to create a believable world and interesting character backgrounds to go with it yet didn’t drone on and on with descriptions and back stories. As a reader I was fully immersed and invested in the story and characters before the end of chapter 3.
Zander for all his power and alpha male presence is a kind, charming and witty character. I expected an angsty, brooding, and borderline a-hole of a character but was caught by surprised with the tender aspect of his character. Not what I expected from a former Navy SEAL
Selene on the other hand is fueled by rage. She’s a very driven, single minded character. Every move she makes is to bring her one step closer to getting revenge on the person she believes is responsible for her mother’s death. It was interesting to watch how Selene handled the addition of suddenly finding herself Zander’s Bondmate and the responsibilities that come with it.
I enjoyed the addition of more than just shifters in Cole’s Redemption. It felt like a paranormal buffet and added some interesting possibilities for the series.
There’s plenty of action, mystery, suspense and of course some very sexy scenes between Zander and Selene, those two are pretty hot together. However, Cole’s Redemption lacks a bit in the building of an emotional relationship between Zander and Selene. It’s always tricky when a story has “fated mates” or Bondmates as in this story but I felt like there wasn’t enough growth between them romantically to justify them going from virtual strangers to “in love” Bondmates. The potential for a great romance was there, but it just never quite hit the mark.
As a paranormal romance Cole’s Redemption wasn’t too immersed in blood and gore, yet it wasn’t exactly a light and fluffy romp either. I would put it right in the middle of the paranormal scale, not too much and not too little.
All in all, Cole’s Redemption did what it was supposed to. It had a likeable cast of characters, told an interesting story and introduced me to a new series that will have me picking up the next book in the series as soon as possible.
Sheep Rating: 4

About the Author:
website-FB-twitter
J.D. Tyler is an award-winning, multi-published author who writes for New American Library under three pseudonyms. Whether this is due to an overdose of ambition or a multiple personality affliction, she’ll never tell.

J.D. writes dark, sexy paranormal romance and has a huge thing for shifters, vampires, the Fae, and just about everything else that goes bump and grind in the night. She can’t get enough of those dangerous supernatural heroes, and the fun of creating her own was just too much temptation to resist… so she didn’t. J.D. doesn’t do self-denial.

When she isn’t writing, J.D.’s idea of a good time certainly isn’t cleaning house (sniff), bungee jumping (not in this lifetime, or the next), or camping (her idea of “roughing it” is a slow bellboy). She enjoys reading, being pampered like the diva she is, and spending time with her awesome family. She lives in Texas with her two teenagers.