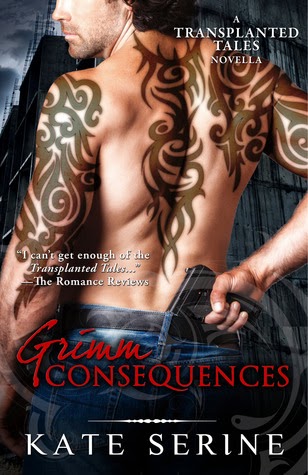 Saying Nate Grimm has a dark past is an understatement. Fortunately, no one's bothered to look too closely at the Fairytale Management Authority's lead detective and part-time Reaper. And that's the way Nate wants to keep it. For after centuries of torment and loneliness, he's finally found happiness with the hot and hard-charging love of his life, Tess "Red" Little.

Of course, his love for Tess is the reason there's a posse of Reaper judges after him, led by a sadistic bastard acquainted with Nate from once upon a time. Now, Tess will pay the price for Nate's transgressions unless Nate severs his ties to the transplanted Tales--and Tess--forever. His enemy has the advantage in speed, malice and brutality. But the Reapers have underestimated the depth of Nate's love and devotion. And the fury of his wrath.

Ms. SeRine takes the fairy tales denizens and puts them in a world called the Here and Now, whereas Tales, they live like we do here in reality. In this story, Little Red Riding Hood, is Tess “Red” Little, who “saved” a reaper from his own cold heartless life. Now, she and Nate Grimm (play on the grim reaper and Grimm Brothers) are detectives, solving crimes and saving lives, and doing a whole lot of loving with each other too.

The author brings heart stopping paranormal with bad reapers on their “tales” and burning happily ever after love between two characters that click. You’ll never look at fairy tales the old way ever after.

About the Author:
website-FB-twitter
Like a lot of other writers, I began storytelling even before I could hold a pen, entertaining family and friends with intricately plotted stories and skits at family gatherings. By the age of six, I was writing poetry and short stories and gearing up for my first novel manuscript, which I completed when I was fourteen. Many other such “practice” projects followed through the years and are currently taking up residence in a 75-gallon storage trunk in my upstairs loft, anxiously awaiting revision or cannibalization for the good of other projects.

I write romance novels—currently of the paranormal romance, urban fantasy, and romantic suspense variety. But I fully intend to write horror, epic fantasy, and sci-fi at some point. I’m represented by the fabulous Nicole Resciniti, who is an absolutely amazing agent! She is extremely patient with my penchant for breaking the rules when it comes to genres and knows exactly how to help me dial it back a notch while still keeping things edgy.

I live in a smallish, quintessentially Midwestern town with my husband (variously referred to online as Webmaster or Handsome Hubby), and two sons (henceforth known as Professor and Costello). When I’m not doing the day-job-thing or the wife/mom/maid/chauffeur/pack mule-thing, you’ll find me curled up with my laptop and a strong cup of coffee busily and happily doing the writer-thing.