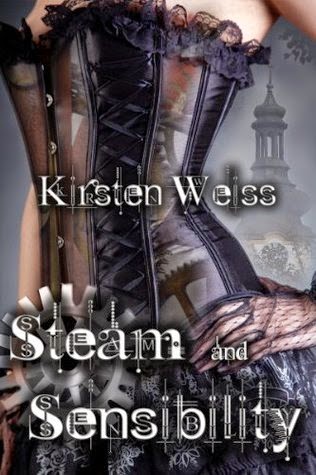 At 19, Englishwoman Sensibility Grey has spent her life tinkering in her father’s laboratory and missing the finer points of proper British life. But when her father dies in penury, she’s shipped to San Francisco and to the protection of an uncle she’s never met.

The California Territory may hold more dangers than even the indomitable Miss Grey can manage. Pursued by government agents, a secret society, and the enigmatic Mr. Krieg Night, Sensibility must decipher the clockwork secrets in her father’s final journal, unaware she’ll change the world forever.

Magic, mayhem, and mechanicals. STEAM AND SENSIBILITY is a pre-Steampunk novel of paranormal suspense set in the wild west of the California gold rush.

Steam and Sensibility is Kirsten Weiss’s first installment of the Sensibility Grey series. Sensibility Grey is a 19 year old Englishwoman who recently lost her father and finds herself aboard a ship to San Francisco during the gold rush. She is a likeable character who you want to see succeed, especially when she finds herself immersed in nothing but trouble. When she lands in San Francisco, she discovers she has more to worry about than either her lack of funds or the loss of her father.

From the moment the Sensibility arrives in San Francisco, this book is nonstop. At every turn, we are introduced to some new character who wants something from Sensibility. We have Miss Jane Algrave, the owner of the new gambling hell, who has many hidden talents and will leave us guessing for much of the book. The extremely attractive and helpful Mr. Krieg Night, who sadly didn’t get as much page time as I would have liked. I enjoy a little more romance than I found in this story, but since it is listed as paranormal suspense, I really have no right to complain. We also have the Marquise, Lupe, her servant, and all the others living on the rancho, but some things you will just have to read for yourself.

Kirsten Weiss weaves a tale that gets more and more involved with each page you turn. Sometimes, I’m afraid too involved, as I was often confused with who worked for whom. In addition, I did not really love the story premise, and although I liked Sensibility as a character, I’m undecided on whether I want to read the future installments.

So where does that leave us? Well, if you like a lot of romance or a strong paranormal flair, then maybe this is one you should skip. On the other hand, if you like books that keep you guessing until the end, then maybe you'll want to give it a try. 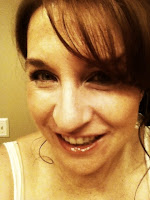 About the Author:
website-FB-twitter-Google+-Pinterest
Goodreads-Newsletter URL
Kirsten Weiss is the author of the Steampunk novel, Steam and Sensibility, and the Riga Hayworth series of paranormal mysteries: the urban fantasy, The Metaphysical Detective, The Alchemical Detective, The Shamanic Detective, and The Infernal Detective.

Kirsten worked overseas for nearly fourteen years, in the fringes of the former USSR and deep in the Afghan war zone.  Her experiences abroad not only gave her glimpses into the darker side of human nature, but also sparked an interest in the effects of mysticism and mythology, and how both are woven into our daily lives.

Now based in San Mateo, CA, she writes paranormal mysteries, blending her experiences and imagination to create a vivid world of magic and mayhem.

Kirsten has never met a dessert she didn’t like, and her guilty pleasures are watching Ghost Whisperer reruns and drinking good wine. You can connect with Kirsten through the social media sites below, and if the mood strikes you, send her an e-mail at kirsten_weiss2001@yahoo.com
Sharon Stogner at 12:30 AM
Share