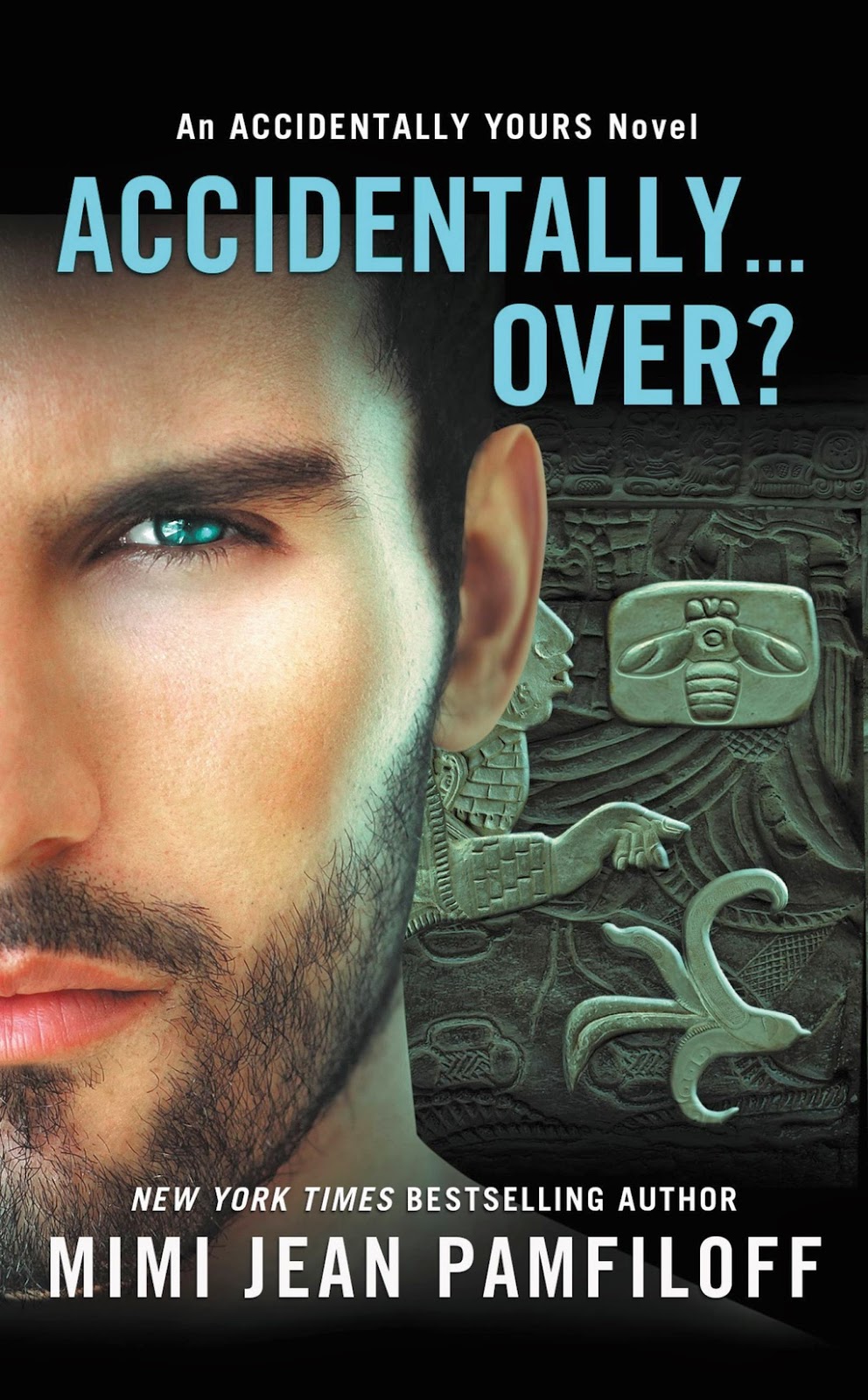 When it comes to Máax, the God of Truth who refuses to follow the rules, there's more to him than meets the eye. Literally. Because Maáx is invisible! Which is probably why, after seventy-thousand years, he's still unable to find a mate.

Ashli Rosewood was never meant to die. In fact, her death might be the very reason the gods are now faced with stopping that pesky doomsday right around the corner. If only there was a way to undo the past. Cue Máax. Seven feet of divine masculinity and the unruly god charged with saving Ashli. With a little help from an ancient Mayan tablet, Máax will travel back in time and set things right.

Easy, right? Wrong. Because Máax has one teensy challenge. He's invisible. And every time this impatient, powerful deity gets anywhere near Ashli, he spooks her right into harm's way. Meaning...she dies, and he has to start all over again.

Cliff, banana peel, runaway storage container filled with Belgian chocolates, bee sting, the list goes on and on. Does the Universe have it out for this girl? Sure seems that way. But why? And what will Máax do when he begins to suspect that not only is Ashli the key to stopping the apocalypse, but she may be "the one" he's been waiting seventy-thousand years for. How will he save the one woman the Universe insists on killing and who wants nothing to do with him?

Accidently….Over? is book 5 in the Accidently Yours Series. Well, there are technically 7 books in the series all together with a few .5 Novella’s along the way.

Maax is the God of Truth he cannot lie or can he? He is another Deity with a job to do. Maax’s job was to save the word from the apocalypse. All he had to do was go back in time and keep one mortal woman Ashli Rosewood alive. That should not be that hard right, Maax was a God. Ashli was just a simple Mortal. Maax had a few obstacles preventing him to succeed in his task. The Apocalypse info came directly from Maax’s crazy Brethren (aka sister) who did not always tell the truth or the whole truth and was always up to no good. He was not sure if this was another one of her mind games. Maax was invisible and the woman Ashli who he is supposed keep alive is the key to the Apocalypse however the universe wants her dead.

The characters were easy to like. How could I not like them their individual craziness kept it exciting. The God of bees had a bee hive as a hat. Cimil’s crudeness was sometimes over the top. Can we say ‘selfie’ but It was Cimil’s character so you had to take it all in stride. Maax was an overbearing extremely sexy god. I know he was invisible, your mind has to paint the picture for you and in my mind he was beautiful and sexy. He was a God so let’s go with it. Failing his mission was not an option for him. Maax fell in love with Ashli instantly and Ashli of course hated him, actually she was not sure what she thought of him. Ashley dies practically every visit which was kind of funny. You have to read it to understand why I found it funny.

I do recommend book one first Accidently in love with…. A God? It will help make more sense. Reading the series is not a necessity. This was a fun and easy to read romance with lots of feuds, tears and steamy scenes. In fact most of the characters in the book had some sort of love story and in the end was it all about love? You need to read to find out.

Máax stared down at the hysterical, screaming woman. He was about to offer a few calming words, such as “Shut the hell up,” but then something peculiar happened.
What the fuu . . . ? He stumbled to the side but caught himself. He’d never experienced anything so unusual, so potent. But what was it? It didn’t hurt. No, quite the opposite. It felt like a sack of fucking wonderful dropped on his head.
Máax looked at the woman once more, and it hit him again.
Click.
He gasped. She was doing this to him? How? There was no logical explanation, other than . . .
He lost his train of thought. Gods, she is magnificent.
Holy Christ! He stepped back and stared at Ashli. Is that . . . Am I . . . ? He was drooling! Like a hungry dog!
The odd, euphoric sensation hit him again, nearly tumbling him over. Nothing in his seventy thousand years of existence could help him articulate the sensation. It was as if the damned woman had jumped inside his body, soldered herself to every molecule of his light, and then sucked away any rational thought. The hollow pit in his chest, one he hadn’t known existed, felt instantly placated. That spot now felt warm and mushy. The center of gravity shifted from beneath his feet toward the direction of the woman and began pulling him to her like a shooting star.
Oh, shit. She’s my mate? He took two more steps back. No. No. Hell no! But how? And why now? He’d never asked the Universe for a mate. He didn’t want this. He didn’t want to be tethered to some . . . some weak mortal woman, or any woman for that matter. Where was the godsdamned logic in that? For fuck sake, he was a lone wolf—answered to no one and nothing. And he was invisible,
went where he liked when he liked. (For the time being, anyway.) After he went on trial for his recent multitude of offenses, he’d be entombed for a very, very, very . . . yes, very fucking long time! And now this, this . . . woman had messed it all up! Filii canis! Now he was truly going to suffer. He’d have something to miss!
Then another truth dawned on him. Cimil set me up! Again! He was going to kill her. And, gods fucking dammit, did the woman—this, this, Ashli—have to be so godsdamned hot?
Infernum. Her beauty was beyond that of any deity. Dark golden-brown skin, hair like black-licorice ribbons wild about her face and trailing down her back, and exotic eyes, turning up in the corners like a feline’s. And her lips . . . Her lips were plump and full, just the sort a man longs to feel sliding over every inch of his—
Get a hold of yourself, man! But holy saints she was hot. What was he going to do?
Why don’t you start by saving her, asshole?
Right. First things first, though; he had to get her to stop screaming. “Ashli, I command you to stop screaming.”
Her beautiful hazel eyes widened, and she bolted toward the dusty, narrow road that ran along the beachfront.
Sanguine ad infernum! She’s running away? “Ashli, I command you to stop. I won’t hurt—”
A large silver bus came out of nowhere. “No!” 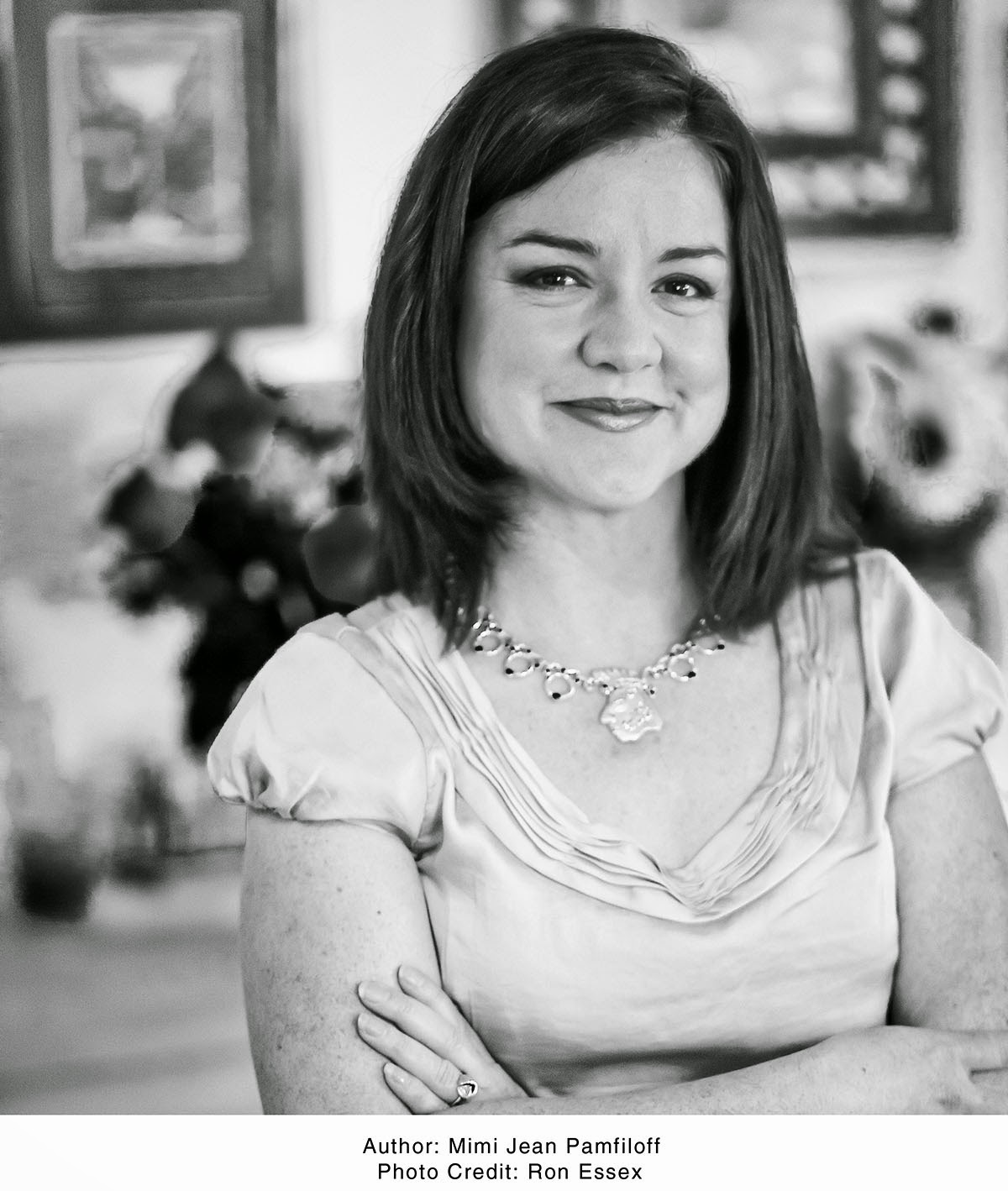 About the author:
Website-Facebook-TwitterGoodreads
Before taking up a permanent residence in the San Francisco Bay Area, Mimi spent time living near NYC (became a shopaholic), in Mexico City (developed a taste for very spicy food), and Arizona (now hates jumping chollas, but pines for sherbet sunsets). Her love of pre-Hispanic culture, big cities, and romance inspires her to write when she's not busy with kids, hubby, work, and life...or getting sucked into a juicy novel.

She hopes that someday leather pants for men will make a big comeback and that her writing might make you laugh when you need it most.