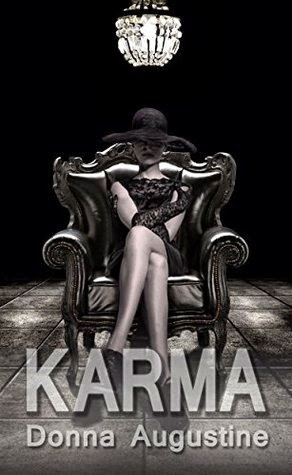 People say karma's a...well, you know. Personally, I don't think I'm that bad.
It's not like I wanted this job. I wasn't even in my right mind when I accepted
it. Now, I'm surrounded by crazy coworkers like Lady Luck, who's a bit of a tramp,
and Murphy's Law, who's a bumbling oaf.
But the worst is Fate. He's got a problem with transfers like myself, and I have to see him constantly.
It's unavoidable. We're hunting the same man, my murderer.

The powers that be can be mercurial folk. Karma is book one of a new series that so far is rollicking good fun. The story begins with Camilla waking up in a daze and looking around at the devastating crash that has thrown her some distance from her train-car. She calls out for help but a voice behind her states they cannot hear you, you're dead. She is then offered the opportunity to find her killer, as well as the killer of all those in this crash, or to move on.

Well this reader is certainly on board with the concept of Oh Heck Yes, You Betcha, just show me the dotted line. From here on out Camilla is dead, she is now Karma, and when she asks what she is supposed to do she is told well you're Karma and the adventure begins, just as soon as she finishes the old crossword puzzle. We are introduced to some incredibly colorful and fun characters that kept me grinning throughout the reading and let me just say if Lady Luck ever wants to take you to Vegas, get on board that bus.

The story is not all chuckles however; there are serious situations, revelations, action, and a mystery to be solved, as well as lessons about what it really means to be cast in this role. The writing was clean and well executed keeping me engaged and not wanting to put the book down with a need to know what was going to happen next. I would have liked a little more world building, but in all fairness this story is not really about the world so much as it is about the character introductions and interactions, the mystery of who and why Camilla is murdered, as well as the set up for future adventures and given this is book one I have high hopes there will be more to come.

The ending was satisfying and just open-ended enough to keep me watching for the next installment in the series. I would recommend this book to those who enjoy a light urban fantasy adventure with a humorous bent, as well as a taste of the dark side. I received this book with a request for my honest review should I choose to write one and without any compensation whatsoever, other than the joy of reading a new book.

About the Author:
website-FB-twitter
Donna Augustine’s lifelong ambition was to become the crazy cat lady. Unfortunately, when family allergies cut short her dream of living in a house full of furries, she turned her ambitions toward writing. Combining her love of fantasy, scifi, horror and romance, she tries to string together interesting twists on urban fantasy.