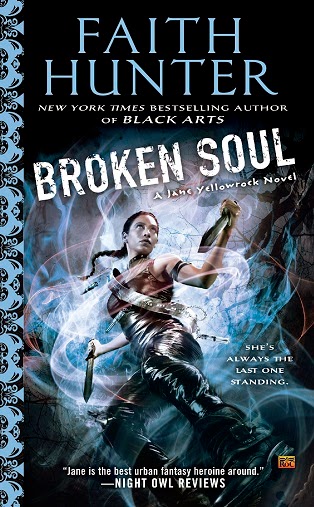 When the Master of the city of New Orleans asks Jane to improve security for a future visit from a delegation of European vampires, she names an exorbitant price—and Leo is willing to pay. That’s because the European vamps want Leo’s territory, and he knows that he needs Jane to prevent a total bloodbath. Leo, however, doesn’t mention how this new job will change Jane’s life or the danger it will bring her and her team.

Jane has more to worry about than some greedy vampires. There’s a vicious creature stalking the streets of New Orleans, and its agenda seems to be ripping Leo and her to pieces. Now Jane just has to figure out how to kill something she can’t even see.

Broken Soul is the eighth installment in the Jane Yellowrock series and gadzooks what an adventure! The story opens with Jane and her crew deep in preparation for a visit from a delegation of European vamps and of course just about anything and everything that can go wrong with the planning does.

There are a plethora of mysterious occurrences, elevators going wherever they please, and coveted secrets are revealed. In the meantime there is also a team of evil greedy vamps that have come to town wreaking havoc with multiple assassination attempts, a strange new creature that is out to gobble them up, and then as an aside a fight with an alligator in the swamp (I'll let you guess who wins the alligator brawl).


The writing continues to be tight with edge of your seat suspense and nonstop action that keeps you turning page after page to see just what will happen next and who will survive. The characters are wonderfully memorable, new and old. This installment also finds Jane continuing her journey of self-discovery; taking her deeper into what she is, as well as what this means. And in the midst of all the pain, fear, and danger there is a tasteful bit of smexy for those who enjoy a well rounded blood, sweat, and tears with a little woopie in their urban fantasy tale.

Overall Broken Soul is a great installment in the series and for those who have not yet read prior books- well it is still a fun adventurous read, but you will miss a lot of prior world building and back story that make this series so tasty. I would recommend starting at least with book one, Skinwalker (Jane Yellowrock, Book 1), and hopping on the Jane Yellowrock train reading your way through Jane's journey. For this diehard urban fantasy fan Broken Soul and the Jane Yelllowrock series offers everything I look for in great urban fantasy books and it will continue to be a series I revisit again and again just to re-experience the ride. I received this book via NetGalley.

Her long-running, bestselling, Skinwalker series features Jane Yellowrock, a hunter of rogue-vampires. Her Rogue Mage novels, a dark, urban fantasy series features Thorn St. Croix, a stone mage in a post-apocalyptic, alternate reality. She has a new paranormal crime solving series featuring Nell Nicholson Ingram, who can siphon away the magic of others, to be released in late 2015.

Under the pen name Gwen Hunter, she has written action adventure, mysteries, thrillers, women’s fiction, a medical thriller series, and even historical religious fiction. As Gwen, she is a winner of the WH Smith Literary Award for Fresh Talent in 1995 in the UK, and won a Romantic Times Reviewers Choice Award in 2008. Under all her pen names, she has over 30 books in print in 29 countries.

Faith Hunter writes full-time, and is a workaholic with a passion for jewelry making, white-water kayaking, travel, all which appear in and are used in her novels. She gave up cooking for lent one year and the oven stayed turned off for so long that it refused to come back on and had to be replaced, but she is having a hankering for homemade bread, and is considering getting back to baking in her remodeled kitchen. Occasionally, she remembers to sleep. The jewelry she makes and wears is often given as promo items to fans who come to her signings, and is used as prizes in contests. She and her husband love to RV, traveling with their rescued Pomeranians to whitewater rivers all over the Southeast. (The poms don’t whitewater. The pampered dogs stay in the RV in lazy, air-conditioned comfort!)

Faith is a founding member of MagicalWords, a writing forum at www.magicalwords.net geared to helping writers of fantasy and other genres.