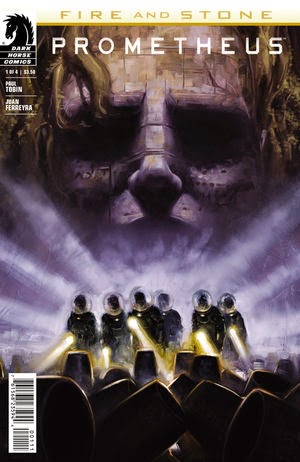 Preview
When the Prometheus never returned from her fateful journey to LV-223, the questions surrounding the origins of man went unanswered. Now a new team of explorers seeks to uncover the dark mystery that holds not only the fate of theoriginal mission, but possibly their own damnation.

Prometheus was one of those movies that you either loved or hated, and the hate tended to stem from the litany of plot holes. Turns out that most of those plot holes weren't actually plot holes at all though, just unanswered questions and unexplained plot points. And there's nothing a movie audience hates more than having to think when watching a summer blockbuster.

To perhaps help answer a few of those unanswered questions, and likely raise even more questions, Dark Horse has a new cross-over event featuring a brand new away mission to the doomed planet that was the stage for Prometheus. This time around our wayward cast of astronauts are not only looking to pick up where the original mission left off but find out the fate of the crew that never returned, including that of billionaire and god-wannabe, Peter Weyland, and his diabolical pursuit of immortality and the secrets of the Engineers.

Much like the film, the visual aspect is vivid and captivating even in its most minimalist moments. Juan Ferrerya brings his A-game to this series and does about as good a job at hearkening to the original film one could ask for. But when the tone has to change a bit with the scenery, particularly when the team finds a jungle on what should be a barren wasteland of a planet, the artwork does a lot to build the suspense of what lurks within.

I have a feeling this is going to get intense.