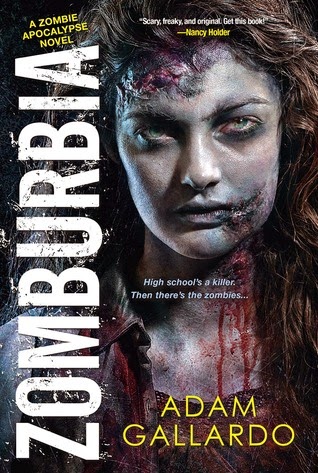 My name is Courtney Hart, and I'm here to tell you about things that suck. Being born in a podunk town like Salem, Oregon, for one. Living in a world infested with zombies? That, too. And the meat heads I go to school with? I think I'd actually take the undead over them most days. But I have a plan to get out of here and move to New York. I just have to keep selling Vitamin Z along with your fries at The Bully Burger. The secret ingredient? Zombie brains.

I've noticed things are getting even worse lately, if that's even possible. The zombies seem to be getting smarter and faster. If I can avoid being arrested, eaten by shufflers, or catching the eye of some stupid boy, I should be able to make it through finals week still breathing.

Zomburbia is not your typical zombie apocalypse. It also is not your typical teenage angst YA. It’s a mash up of the two. The apocalypse did not end the day to day life for the living. For after the initial return of the flesh-eating undead, life returns to normal, well, as normal it can be with the danger from the occasional zombie, or shuffler, as they are called in this novel.

Courtney Hart lives with her father, who teaches at the local community college. Her mother is gone, but not eaten by zombies, she ran off with her Pilates instructor. Courtney also sells Vitamin Z, which the main ingredient is zombie brains, to earn enough money for her big plan when she graduates. Courtney goes to high school with other teenagers, the school fenced in and guarded by armed security guards. Cities are no more, taken over by zombies. But suburbia still exists and is where the living reside. So does the zombies, in nearby woods. Long as one’s home has a chain link fence surrounding it and the living stay away from the wooded areas, they are fine. But lately, Courtney notices more and more zombies, and some of them aren’t the regular shufflers, but fast and they gather together in packs, doing planned attacks on the living. Suddenly, suburbia is not as boring as it has been before. It’s becoming downright deadly.

I like the difference in this YA zombie apocalypse, with people going on their lives as normal. I liked the characters Willie and Sherri, both who are Courtney’s friends. I even like her father. But I am not so sure about Courtney Hart herself. At first, I liked her snarky attitude. But as the novel goes on, she gets more angsty. And mean to her friends and others, when they haven’t been mean back. But I do begin to like her in the last chapters as she learns to grow up to help save others. If you looking for romance—there’s that. If looking for a scary, dark story, you got it.

I give Zomburbia 4 undead sheep

About the Author:
website-FB-twitter
Adam Kreutz Gallardo is a writer who lives and works in Oregon. He's mostly known for writing comics (Star Wars: Infinities -- Return of the Jedi, 100 Girls and Gear Schoolvolumes one & two).