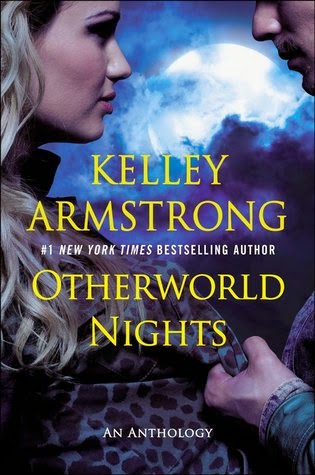 Kindle Edition, 368 pages
Published October 28th 2014
by Plume
This short story collection will include many brand-new tales and others only previously available on Kelley Armstrong's website. Most of the stories will feature the werewolves of the Otherworld, Elena and Clay, Jeremy, Karl and other members of the American Pack. These are some of Kelley Armstrong's best-loved and most enduring characters, from bestselling books such as Bitten, Stolen and Frostbitten.

This short story collection by Kelley Armstrong includes many brand-new tales and others only previously available on Kelley Armstrong's website, of the werewolves Elena and Clay, along with a story with Karl and Hope, Cassandra the vampire, Adam when he was a child, the werewolf, Reese, and Savannah. Most of them is Elaina and Clay tales, one of them one set Christmas time. All the stories are good and I enjoyed each one for itself. Now, I had read all the novel s in the OtherWorld series, but I don’t think you nee t read all of them to read this collection. It just doesn’t hurt not to read some of the novels first. If I could pick a favorite or two—“Hidden,” the Elena, Clay and their kids’ Christmas story, and the first one, “Demonology,” Adam’s story of his beginning. One has Elena wondering should she or shouldn’t she tell the kids the truth about what she and Clay were, among preparing for Christmas in a lodge in Canada and the fear from a mutt. The other styr shows us Adam as a young boy with his demonic fire powers growing and what his very human mother tries to do to help him.

I am glad that Ms. Armstrong has returned to OtherWorld and the characters I love and know as well as my own family, after reading them in adventures over the years Ms. Armstrong delivers what she promises, and this book is no exception.

I give OtherWorld Nights 5 sheep

About the Author:
website-FB-twitter
Kelley Armstrong has been telling stories since before she could write. Her earliest written efforts were disastrous. If asked for a story about girls and dolls, hers would invariably feature undead girls and evil dolls, much to her teachers' dismay. All efforts to make her produce "normal" stories failed.

Today, she continues to spin tales of ghosts and demons and werewolves, while safely locked away in her basement writing dungeon. She's the author of the NYT-bestselling "Women of the Otherworld" paranormal suspense series and "Darkest Powers" young adult urban fantasy trilogy, as well as the Nadia Stafford crime series. Armstrong lives in southwestern Ontario with her husband, kids and far too many pets.