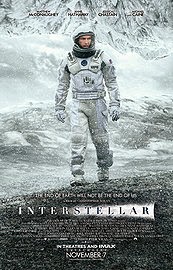 Rating:PG-13 (for some intense perilous action and brief strong language)

Genre:Action & Adventure , Science Fiction & Fantasy
Directed By:Christopher Nolan
Written By:Christopher Nolan , Jonathan Nolan
In Theaters:Nov 7, 2014
Runtime:2 hr. 49 min.
Paramount Pictures - Official Site
With our time on Earth coming to an end, a team of explorers undertakes the most important mission in human history; traveling beyond this galaxy to discover whether mankind has a future among the stars. (C) Paramount

It's a rare movie that will drag me out of the comfort of my own home and into a theater where I must contend with people talking, candy bags rustling, and sound levels that leave me cringing and sticking my fingers into my ears. But on the recommendation of a friend, Interstellar recently became one of those movies...and I'm glad of it.

My friend's very science-oriented son described it as being rather like 2001: A Space Odyssey, only with more action and better science. "The most accurate depiction of a black hole ever in a movie," he called it. I'll have to take his word on the latter part (but American theoretical physicist Kip Thorne did advise on the film, so I'm betting my friend is right). As to the comparison to 2001? Yup. I can see that, too...but with waaay more action.

In case you haven't heard of the film (!), here's the synopsis from the official site

In the future, governments and economies across the globe have collapsed, food is scarce, NASA is no more, and the 20th Century is to blame. A mysterious rip in spacetime opens and it's up to whatever is left of NASA to explore and offer up hope for mankind.

Interstellar chronicles the adventures of a group of explorers who make use of a newly discovered wormhole to surpass the limitations on human space travel and conquer the vast distances involved in an interstellar voyage.

That, in my opinion, is about the most boring description (*yawn*) anyone could give, because you’ll notice that nowhere are the words epic, breathtaking, visual feast, or WOW used. And the movie is deserving of all those words and more...at least cinematically speaking.

As for the other stuff, I thought the story held together okay, the acting was adequate (and given that I'm not a particular fan of either Matthew McConaughey or Anne Hathaway, that's actually saying rather a lot), and the plot was easy to follow. But seriously, those space scenes? Epic. Breathtaking. A visual feast. Wow. They alone made it worthwhile going to the theatre for the big-screen experience--and make it easy for me to recommend that others do as well.