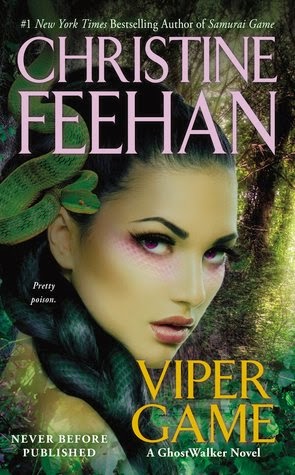 GhostWalker Wyatt Fontenot knows the price he paid for the secret military experiments that gave him his special catlike abilities. After all, he left his bayou home a healer and came back a killer. While Wyatt and his GhostWalker brother Gator may have known exactly the sort of game they were getting into, Wyatt never anticipated where it would lead—or to whom.

The swamps hold many mysteries, but few are as sinuously seductive as Le Poivre de Cayenne. The woman the locals call Pepper is every bit as enigmatic as the three little girls she’s desperately trying to protect. From what, Wyatt is soon to discover. Right now Pepper needs a man like Wyatt. Passionately. But her secrets are about to take them both deeper into the bayou than either imagined—where desire is the deadliest poison of all.
NEVER BEFORE PUBLISHED
INCLUDES A BONUS EXCERPT FROM CHRISTINE FEEHAN’S GHOSTWALKER NOVEL, NIGHT GAME

Can you imagine being a cat in heat 24/7? That is what it is like for Pepper. Pepper genetically altered and used as a secret weapon and forced to take care of 3 little children who the bad people will hurt if Pepper does not do what they want. Pepper is desperate to protect these children from harm.

Wyatt is a ghost walker who also has been genetically altered, however his skills are used for good and not part of the same team. Wyatt comes home to find his Nonny has been bullied. Using his abilities he and his team set out to find the men that bullied her to teach them a lesson of picking on an old woman. What he did not expect was what he found across the bayou and what ended up at Nonny’s house, Pepper.

Something happened between Wyatt and Pepper, desire? Well, she was a woman who held a knife. The Fontenot boys always seemed to fall for woman who carried a good knife. Unsure of what he was getting himself into with Pepper, Wyatt however knew for sure that he would do whatever it took to get those three children out of there.

I have read Feehan’s books, even though Viper Game was not my favorite I do recommend her Ghost walker series

About the Author:
website-FB-twitter
I write every day and have done so since I was old enough to pick up a pen. (I spent a lot of time getting in trouble at school for writing instead of doing the things I was supposed to do.) Once I create my characters, I try very hard to have them react to situations as they really would. Sometimes I have preconceived ideas of what I would like them to do, but they don't mind me, because it would be out of character for them. They take on a life of their own. Sometimes when I throw difficult situations at them in the hopes I'll get a certain reaction and they don't do what I want, I complain bitterly to my husband and he laughs at me. Still, it is important to me to have them be real, not perfect people, so they make mistakes we lesser mortals might make.
Sharon Stogner at 12:30 AM
Share