So you’ve come for a bite of Dyami have you? Drummer of the band Riot? You know he’s a spicy hot werewolf, right? You sure?

Well, okay, but don’t say I didn’t warn ya. He’s likely to bite back. 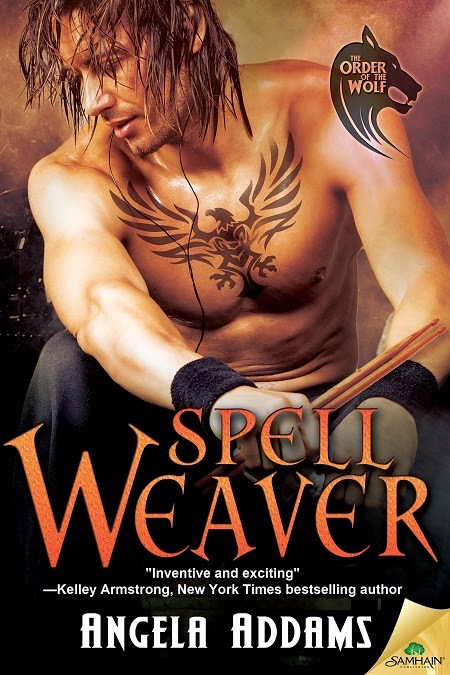 Ingredients:
· One naughty shifter, oozing bad boy
· Blond, shaggy hair
· Eyes like chocolate, a little on the bitter side though so you might need to add some sugar to sweeten him up
· Tall, built like an athlete, which means a lot of lickable muscles
· One eagle tattoo on his chest
· And one on his…hmmm, nah, you’re not ready to hear about that one yet

Season with:
He’s been poisoned by a Huntress so he’s battling for his life, gonna need just the right kind of TLC…possibly, nah, definitely in the dirty variety…he knows his way around a g-spot, ladies…things are gonna get hot and wet for realz, yo.

Dietary Warning:
He’s one of Mayhem’s boys. Wait, you don’t know who Mayhem is? Oh, boy, well, Mayhem’s up next so you might as well keep those panties off, cause they’d just get soaked all over again.

Copyright © 2015 Angela Addams
All rights reserved — a Samhain Publishing, Ltd. publication
“I’m going to ignore the fact that you reek of booze, and that you’re a bit of an ass, and do this for you.” Summer backed away, circled behind the counter, her eyes still locked on him. “I need the cash.”

He was hot, in a disheveled kinda way. Scruffy jaw. Intensely dark eyes—probably a deep brown. It was hard to tell with that dirty blond hair covering his face in a mess. He was attractive—not as in pretty boy more like an I’m gonna mess you up, but you’ll be grinning when I do it kinda way. Bad boy for sure. And he looked familiar, which was odd since she knew practically no one in town. There was something about this guy that stirred her up. It was probably just the boredom getting to her. A few months in town and she hadn’t yet built up a regular clientele, and it was too early in the season for the heavy tourist drop-ins. Not to mention too early in the morning for most tattoo shops to even be open. Noon was standard, and here she was taking on work at ten a.m. She gave a mental shrug. She’d come into work early for some crazy reason and there was nothing else to do. So what the hell, right?

“Thanks.” He lifted his hand from the counter to run through his hair.

She scoffed as she pulled out her laptop. “Oh, you’ll be paying out the nose, so you can keep the thanks and just hand over the cash.”

He chuckled, a sound that both surprised and tantalized her. She wanted to make him do it again. What the hell?

Her computer finally loaded and she pulled up the database she often used for locating script. “What do you want it to say?”

He was silent for a moment and she glanced up at him, her fingers poised over the keyboard.

She shivered as their eyes locked, his look so intense that it left her cold. “Hmm, cheery.” She snapped her gaze back to the computer, suddenly feeling like the last thing she wanted to do was get lost in those eyes. Definitely brown—like chocolate, dark, rich—but a little on the bitter side. “You sure you don’t want something more positive…like strength, power?”

“I thought it was policy not to offer an opinion about a client’s tattoo.” His voice was gruff, like he was offended.

She knew better. This guy liked to play games, wanted to get her riled up like he had before. She learned quick and was a good judge of character. She shrugged. “I have a feeling you’re not going to be like the average customer.” She turned the screen toward him. “Like this?”

He glanced down and nodded. “Yeah, perfect. Across my shoulders.”

Summer pulled the computer back toward her and nodded. “It’s gonna take a couple of sits.”

“Okay, suit yourself. It’s gonna be at least four hours.” She clicked print and shut the computer. “Hold tight, I’m gonna go get set up. I’m Summer, by the way.”

“Huh, cool. Dy. Never heard a name like that before.” And it felt great on her tongue. She liked saying it. “Why don’t you come on back to my room while I prep?”

Dy smirked, ran his hand through his hair again. “Can’t get enough of me already, eh?”

Summer rolled her eyes and gestured toward the back. “Nah, I just don’t want any folks outside seeing someone in here. Like I told you, the counter guy isn’t in yet and I’m not interested in dealing with walk-ins.” And I can’t get enough of you.

He followed her to her little room, which was painted a vibrant blue to match the flashy décor of the rest of the shop. She flipped on the light and motioned for him to sit in the chair. “Just give me a few.”

“Take your time,” he said as he moved to the black vinyl table, leaning more than sitting, in close proximity to her.

“Now an eagle. That would be a cool tattoo.” She snapped on a pair of latex gloves and started prepping her station.

She glanced in his direction as a flurry of moment caught her eye. Eyebrow cocked, she beheld his finely sculpted abs—eight pack, cut just right, with a fine line of manly hair trailing down…

He cleared his throat and she snapped her gaze up to his pec. An eagle in flight spanned his chest.

This guy had money. She gave a nod and a quick smile, refusing to look him in the eyes. She turned to her work as if she couldn’t care less that he was half naked and within a foot of her. Geez, drool much? Ugh. So unprofessional. She felt her cheeks burn, knew her pink highlights would only make it worse and cursed her fair skin.

He was pointing at the back wall of her station where she had a corkboard filled with potential tattoos…some abandoned by folks who chickened out before any ink was started, others who were still trying to cultivate the cash.

“Well, good thing you know how to draw. I’m kinda takin’ a chance here.” He chuckled.

Summer bent down and retrieved her portfolio before tossing it on the table. “See for yourself. The most recent are at the back.”

He perched himself against the table again and started flipping though the photos of her finished work, nodding and grunting his approval as he went. “You been working here long? I mean”—he glanced up with a smirk—“you look like you’re eighteen, how long have you been slinging ink?”

She ignored his jab. “I’m twenty-five, been tattooing since I was sixteen. Only moved here a few months ago. I don’t usually stay rooted in one place for long.” Which was a problem for a young tattoo artist. She didn’t have much of a reputation yet, didn’t go to conventions or anything, didn’t even have a website. Just carried her tattoo kit and portfolio around with her, settling on one place for a while—a month, six months, sometimes a year—before moving on again. Which made it sound like a leisurely existence when really it wasn’t. It was stressful to go from shop to shop, travelling all over the country, relying on her portfolio to sell her ability and get a spot in a shop. But she couldn’t help it. She was always restless, on the search for something…someone. This was the first place she’d ever lived where she was actually thinking of taking root.

“What do your tattoos mean?” He motioned to her arms. “Those symbols? They stand for something?”

She snapped off her gloves and tossed them in the biohazard container. “Yep.” She walked over to the stereo and pulled down a stack of CDs. “Any preference?”

“Secrets, eh? Cool, I can dig that.” Dy snorted, arms crossed over his chest, seemingly unfazed that she hadn’t answered his question the way he’d wanted her to.

She shuffled through the music, paused when her eyes locked on one cover in particular. Ha! With a smirk of her own, she held up the latest release from Riot. “I’m not the only one with secrets.”

“You gonna charge me more now?”

She laughed as she slipped his disc in. “Drummer for one of the biggest rock bands in the country? Hell yes, I am!”

Spell Weaver (The Order of the Wolf, Book 4)
Coloring outside the lines can sting like hell…

Shot by a Huntress, his wolf trapped within him, Dyami Storm is battling a poison that is eating him alive. His only hope is finding his mate, but without his wolf to guide him, he doesn’t know where to look.

The second the sexy bad boy stumbles into her tattoo shop, smelling of booze and oozing attitude, Summer Sinclair knows he’s trouble. She should turn him away, but a strange magnetic pull compels her to help him out with a little ink.

When Summer’s boyfriend walks through the door, Dyami senses he’s in the presence of a Hunter, and the Hunter recognizes him as a wolf. With hackles raised, a weapon coming at him, Dyami’s only choice snaps into place. Bite Summer, marking her as his—and unleashing her powers as a Spell Weaver.

On the run from Hunters and losing his fight against the poison, Dyami is in a race against time to convince Summer her power could change the course of the war…and that his fate is in her hands. 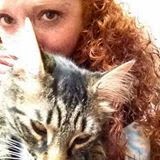 She is an avid tattoo collector, a total book hoarder and loves anything covered in chocolate…except for bugs.

She lives in Ontario, Canada in an old, creaky house, with her husband and children.


GIVEAWAY
Angie is giving away a signed copy of Wolves’ Bane, limited edition Order of the Wolf keychain and a signed Cursed bookmark! Giveaway is only open to Canadian and U.S. addresses. A picture of the giveaway was also sent separately.