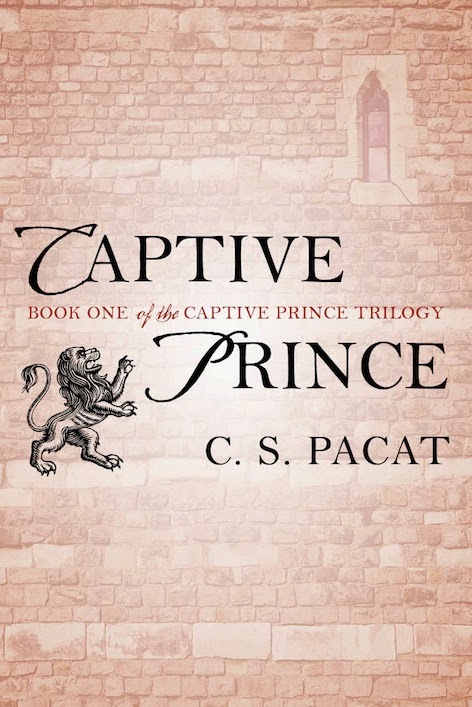 Damen is a warrior hero to his people, and the rightful heir to the throne of Akielos. But when his half brother seizes power, Damen is captured, stripped of his identity, and sent to serve the prince of an enemy nation as a pleasure slave.

Beautiful, manipulative, and deadly, his new master, Prince Laurent, epitomizes the worst of the court at Vere. But in the lethal political web of the Veretian court, nothing is as it seems, and when Damen finds himself caught up in a play for the throne, he must work together with Laurent to survive and save his country.

For Damen, there is just one rule: never, ever reveal his true identity. Because the one man Damen needs is the one man who has more reason to hate him than anyone else…

This is book one of a trilogy. Book two, Prince’s Gambit, releases July 7, 2015 and book three, Kings Rising, doesn’t have an official release date yet. The trilogy was originally a self-published serial by Pacat and is now being released as a Berkley trade paperback. I love the simplicity of the covers, but they don't tell you anything about story.

I was pleasantly surprised that Berkley is publishing what is essentially a gay romance. If you are shy of gay romance then this might be a good book to dip your toes in. While sex is talked about and happening off screen, there is no romance in this book. This story is about how two princes are betrayed, and the political maneuvering by their families to basically get rid of them. They must become allies by circumstance in order to survive.

The book is told from Prince Damianos (Damen) of Akeilos’ POV. He isn’t a very complex character. Kind of generic hero with his survivor and selfless attitudes. But from him we see how both kingdoms are run and the cultural differences between them. To me, his most important role is introducing us to Prince Laurent of Vere. This character makes the story for me. I love the way the author slowly peels back layers of Laurent’s personality. She doesn’t rush the process, like in some romances, by having Damen break through Laurent’s cruel and cold exterior with only his heart of gold. Laurent stays true to character and it isn’t until the end we start to see a crack and the possibilities of what might be underneath. Finding out why Laurent behaves the way he does and his journey is what draws me into this book.

Captive Prince is labeled a romance, but there isn’t any in this book. Got a feeling readers will have to wait till the last book for any of that. The writing is good and easy to read. There is a heartbreaking short story about one of the slaves from Damen’s kingdom, we meet him in the Captive Prince, and how he ended up where he is now.