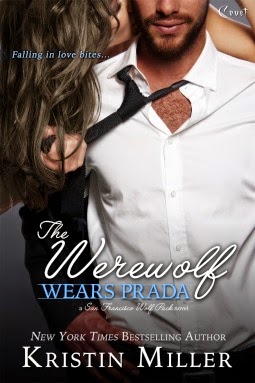 Kindle Edition, 230 pages
April 28th 2015 by Entangled Covet
Melina Rosenthal worships at the altar of all things fashion. Her dream is to work for the crème de la crème fashion magazine, Eclipse, and she'll do much anything to get there. Even fixing up the image of a gorgeous, sexy public figure who's all playboy, all the time. Even if he's the guy who broke her heart a year ago...

Even if Hayden Dean is a werewolf.

Since his father's death, Hayden's the heir apparent to the San Francisco Wolf Pack—well, once he settles down. Hayden isn't interested in giving up his partying ways, except he's pretty sure he's found his fated mate, and the fact that she's a non-shifter is bad news. Now he must find a compromise between the traditions of his wolf world and his certainty that Melina is his...before fate (or another werewolf) bites them both in the butt.
Available at Amazon -BN- iBooks- Kobo


Fashion collides with the paranormal in The Werewolf Wears Prada by Kristin Miller!

Self proclaimed fashion fan, Melina Rosenthal longs to work for Eclipse, the fashion magazine of the ages. When a chance opens up for her to realize her dream, she’s eager to do anything. Even if it means spending time cleaning up the public image of the man who stood her up a year ago.

Werewolf Hayden Dean had his reasons for standing up Melina and none of them have to do with his reputation as a playboy. He’s the heir apparent to the San Francisco wolf pack and must prove his worthiness. That includes finding a suitable shifter mate. Unfortunately for him, all signs point to Melina being his fated mate. With a civil war in his world brewing, Hayden has to make difficult decisions that can make or break his position as Alpha.

The Werewolf Wears Prada is exactly what the title suggests, a light hearted paranormal romance set in the world of fashion. For me there was a pretty good balance of everything: Silliness, danger, suspense and of course romance. The author knew how to keep things interesting with her take on the born shifters versus the bitten shifters. That’s a plot I’m interested in seeing develop in future books.

While I enjoyed the story of The Werewolf Wears Prada, I was on the fence about its main characters. It’s not that I didn’t like them, but they had their moments of not reaching their full potential or being slightly annoying.

I appreciated that Hayden wasn’t a typical a-hole billionaire, he had his insecurities and his doubts and that made him a likable billionaire, which doesn’t happen to me very often. He seemed so human. But he wasn’t just human, he was also a wolf and as the story progressed I wanted to see him become more wolf like, meaning, he should have become more of a leader. Hayden is supposed to be the heir apparent for the San Francisco pack and he had his reasons for being unsure and doubting his ability to lead in his father’s place but by then end he should have shown much more confidence and “alpha-ness” than he did. He still seemed like a lost little boy in a big, bad, dangerous world. Not to say that he doesn’t deserve to be Alpha but I thought that the events that took place at the end should have given him a stronger air of leadership about him and I didn’t get that vibe from him. I’m hoping in future books; we’ll see a stronger, more confident Hayden take control.

Then there was Melina. She was snarky, witty and courageous. As a woman she was bold enough to take on a project that while professionally would elevate her to the status she wanted, it would bring her personal turmoil. Having to work closely with the Hayden who was supposed to take her to an important public function then didn’t show up to pick her up was one thing, having to watch him on tv arrive with two other women was another. Yet, Melina didn’t whine or let herself be intimidated by Hayden. She was a professional for the most part and I loved that about her. What I didn’t love was her obsession with fashion that never really took a back seat even when her life was in danger and especially once it changed drastically. I get that she was a big fan of fashion but sweetie straighten your priorities out! Who cares if it was a designer whatever that got ripped up? You’ve got bigger, wolfier problems!

As a couple though, Hayden and Melina complimented each other very well. Hayden encouraged Melina and never tried to hold her back from what she wanted to do and Melina challenged Hayden to step out of his comfort zone and deal with the real issues he had rather than hide behind a playboy image.

Overall, The Werewolf Wears Prada was an interesting and strong start to a series by a new to me author and I’m curious to see how the major plot that connects each book is going to play out.


Review: So I Married a Werewolf
Sheep Review: 4 Sheep 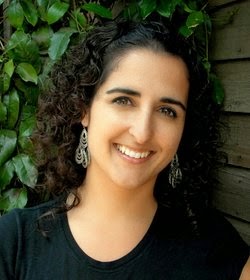 About the Author:
Website-FB-Twitter
New York Times and USA Today best-selling author Kristin Miller writes sweet and sassy contemporary romance, romantic suspense, and paranormal romance of all varieties. Kristin has degrees in psychology, English, and education, and taught high school and middle school English before crossing over to a career in writing. She lives in Northern California with her alpha male husband and their two children. She loves chocolate way more than she should and the gym less. You can usually find her in the corner of a coffee shop, laptop in front of her and mocha in hand, using the guests around her as fuel for her next book.