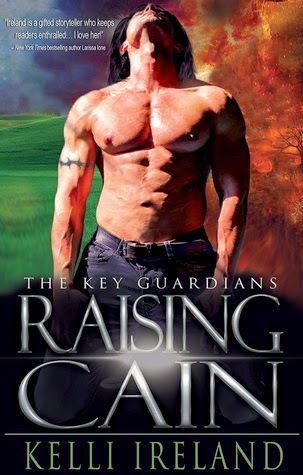 Paperback, 378 pages
Published April 7th 2015
by http://knightagency.net
Hiding places are scarce when both Heaven and Hell intend to find you.

Dani Fayel’s backbreaking job as a stable hand at The Freaks’ Fair isn’t glamorous, but for someone looking to keep to the shadows? It’s perfect. Neither paranormal freaks nor human norms ever notice her. But when Dani is forced to either let a child die in order to maintain her anonymity or choose to save him and risk being discovered, she finds herself unwillingly thrust into the spotlight.

Cain, Hell’s premier assassin and a predatory incubus, is close to fulfilling his final contract and earning his freedom. Hired by the Archangel of Death to find his daughter, Cain follows her trail to the Fair. He works undercover, certain his mark is inside one of the portable canopies or traveling cages. Dead or alive, she equals his ticket to freedom.

When Cain’s objective is divulged, Dani realizes she can’t outrun her destiny. As the fabled Key—the one soul with absolute free will who is tied to the three realms of Heaven, Earth and Hell—only she is capable of opening the gates for the Four Horsemen of the Apocalypse. Whoever frees the Horsemen allegedly commands them. Now both Heaven and Hell are vying for her allegiance, and there are no limits as to how dirty they’ll fight to obtain it. With Hell raining indiscriminate chaos as Heaven maneuvers its players around her, Dani realizes her would-be assassin may be the only man capable of helping her survive.

Review by Jeanie G
The story caught my attention from the first chapter!

Dani is a very independent, snarky character that is easy to fall in love with for the reader. She shows great compassion with lots of moxie. Cain discovers that she is the "Key" he is seeking but is having trouble carrying out the contract and delivering her to her father Sahill of the underworld. He protects her through many harrowing battles and even helps her develop her Archangel talents by throwing her off a roof! Nice guy huh?

There seems to be many concurrent themes evolving in this book. Self preservation, friendship, loyalty, greed, power with a suggestion of sex and romance are a few. The first half of the story moved along at a great pace and developed the characters well. I was riveted by the story and couldn't put the book down. The second half became a little stagnant with many scenes of "capture, escape, battles, waiting, repeat" along with the introduction of new characters. At times I felt as if the story seemed to get lost in the action but the author does bring it home in the finale.

The ending leaves you thinking there will be more adventures for Cain and Dani coming in future episodes. The relationship of Dani and Cain is intriguing and makes you want to keep reading until you come to a "Happily Ever After" place!

I give this story 4 "hopeful" sheep

Review by Bianca Greenwood
In the world of this urban fantasy, paranormal creatures exit alongside humans. Select paranormal beings are on display to entertain the norms in ‘The Freaks Fair,’ a travelling circus of sorts that cashes in on human curiosity. Dani has enjoyed an insular, fairly anonymous existence as the fair’s stable hand; with secrets to keep she cannot afford to draw attention. But when Cain, the fair’s newest muscle-bound employee, starts to keep tabs on the introverted Dani, she is forced to confront some fantastic facts, quickly.

With her first book in this series, Ireland has created a fast-paced, entertaining hook for her readers. I don’t think anything particularly novel or inventive is occurring here, but the book is well crafted, the action non-stop, and the characters likeable. I devoured most of this book in one sitting. I liked Ireland’s colourful diction and dialogue and appreciated her well-written descriptions.

There is, however, a fine line between tension and frustration. I grew slightly weary of the Cain-Dani cat and mouse game. The pace of these characters’ relationship is at odds with the fast pace of the story’s action. The burgeoning relationship between Dani and Cain, along with a tonne of unanswered questions, poises readers to anxiously anticipate book two. I hope Ireland effectively capitalizes on the wave of anticipation and expediently releases book two. I wouldn’t want my friendly frustration to lead to forgetfulness.

About the Author:
website-FB-twitter
Kelli Ireland has the heart of gypsy. She credits it to having lived all over the United States, from the West Coast to the East, from densely populated urban metropolises to a cattle ranch in very rural New Mexico.

When the Fates decided to clip the thread that had tied her to an office in corporate America for more than a decade, Kelli found herself with an immense amount of time on her hands. For two years, she hid from the world as she read All The Books. With her little house bursting at the seams, her husband bought her first an e-reader and, second, a laptop. “Write,” he said. “It used to make you happy.”

Kelli currently lives in the heart of the south where all foods are considered fry-able and bugs die only to be reincarnated in blood-sucking triplicate. It’s ironic, really, seeing as she hates the heat. Her house is occupied by two parrots (Cockatoo and African Gray, both of whom talk…incessantly), two dogs (a narcoleptic bullmastiff and a freakishly smart pound hound with anxiety issues), one Blue Russian terror and a Maine Coon cat to rule them all. Oh, and her husband. But really, they just live there to ensure the animals are tended to in the manner to which they’ve all become accustomed.