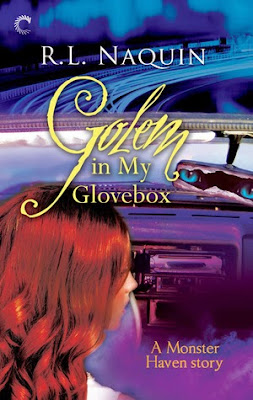 Golem in My Glovebox (Monster Haven #4)
by R.L. Naquin

Kindle Edition, 218 pages
April 21st 2014 by Carina Press
In her role as Aegis, Zoey Donovan has rescued and cared for hundreds of monsters and mythical creatures. Now humans are the ones in need of her help. Someone with a personal vendetta against the Board of Hidden Affairs has kidnapped all the other Aegises in the country--including Zoey's mother.

With the Hidden government in shambles and a string of deadly clues to follow, Zoey and her reaper boyfriend set out on a cross-country chase to stop the kidnapper from killing the captured Aegises. Along the way, they pick up a miniature golem who's on a quest to find his humanity...and may be the key to solving the grisly clues.

If Zoey succeeds in defeating this new evil, she'll finally be reunited with the mother she lost over twenty years ago. But if she fails, she'll become the final victim.

Don't Miss Monster in My Closet, Pooka in My Pantry, and Fairies in My Fireplace, available now!

R.L. Naquin keeps churning out these wonderful stories of supernatural creatures finding solace with an Aegis (a 'hiddens' protector.)

When I start any of these books I just set back, open my mind and let the words of the story take me away to a world teeming with supernatural creatures and new adventures. I feel as if Zoey, Riley and Maurice are old friends of mine and they have stopped by for a visit to tell me about their latest adventure.

During these times they make me laugh, cry or gasp but always keep me wanting to listen attentively so I don't miss anything. I hope the author has a brain full of ideas for new adventures so I can (selfishly of course) continue my relationship with these heartwarming characters!
Review: Monster in My Closet (Monster Haven #1)
Review: Pooka in My Pantry (Monster Haven #2)

About the Author:
website-FB-twitter
R. L. Naquin is an urban fantasy novelist and short story writer. She writes the Monster Haven series for Carina Press. You can find her on the Web at: www.rlnaquin.com

Rachel’s head is packed with an outrageous amount of useless Disney trivia. She is terrified of thunder, but not of lightning, and often recites the Disneyland dedication speech during storms to keep herself calm. She finds it appalling that nobody from Disney has called yet with her castle move-in date.

Originally from Northern California, she has a tendency to move every few years, resulting in a total of seven different states and a six-year stint in England. Currently, she’s planning her next grand adventure. Rachel has one heroic husband, two genius kids, a crazy-catlady starter kit, and an imaginary dog named Waffles.

She doesn’t have time for a real dog.