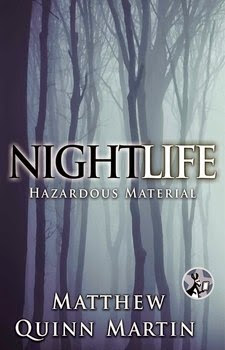 Nightlife: Hazardous Material
by Matthew Quinn Martin
May 11, 2015
Simon and Schuster Digital Sales Inc
Novella
The story of monster hunter Jack and his partner Beth continues in Nightlife: As the Worm Turns…but first, take a short stroll down one of Nightlife's darkest streets in this horror e-novella praised as “thrilling, edgy, and scary as hell” (Jason Starr, internationally bestselling author of The Pack).

Twenty-seven-year-old Jarrod Foster has hit a dead end. He spends his days disposing of hazardous waste and his nights wondering where it all went wrong. While gutting an abandoned roller rink, Jarrod discovers a bricked up video arcade still stocked with vintage games…which, three decades ago, was the site of the largest mass shooting in New York history.

Jarrod’s boss lets him keep one of the arcade games—an oddity called Polybius that no one seems to have ever heard of. Jarrod hopes to sell it and start a new life, but one grim night, he drops a quarter into the game…and the game drops Jarrod right into a nightmare.

As his life spirals into darkness, and his actions begin to mirror those of the long-dead spree killer, only one question remains…is Jarrod playing a game, or is the game playing him?

I was taken by surprise with this one. The author builds edge-of-your seat horror suspense and then takes a left turn into something unexpected. This is a well written, entertaining and unique story. I can’t talk too much about the plot because that would ruin any surprises. But don’t think you’ll know which direction the story is going...because it’s not.

If you are looking for something unexpected, thrilling and macabre then give this one a try.

About the Author:
website-twitter
American actor and writer of films and short fiction. Born in Allentown, Pennsylvania. Martin is a graduate of Albertus Magnus College. He is of mixed European heritage, but identifies strongly as Hungarian-American.

Martin's original screenplay Slingshot was made into a feature film by Bold Films and is distributed by theWeinstein Company. Slingshot premiered at the TriBeCa Film Festival and was featured on Access Hollywood.

As an actor he has appeared in the remodernist film Shooting at the Moon, and P.S. I Love You, and was a minor recurring co-star on the first season of the TV show Fringe.