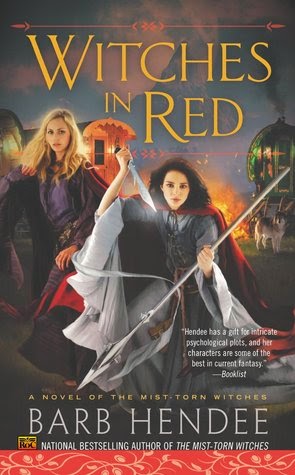 Céline and Amelie Fawe can see into anyone’s past and future simply by touching them. They have used their powers to secure sanctuary—and a fine apothecary’s shop—in the village around Castle Sèone. But their continued safety has a price…
Far to the north, the men of an isolated silver mining community are turning into vicious “beasts” that slaughter anyone in sight. The mines belong to the noble family of Prince Anton—ruler of Castle Sèone and Céline and Amelie’s patron—and Anton’s tyrannical father has ordered his son to solve the mystery as a test of his leadership. He has no choice but to send the witches into the perilous north, to use their abilities to discover the cause of the transformations. Given how much they owe the prince, the sisters have no choice but to accept.

Together with the over-protective Lieutenant Jaromir, Célene and Amelie enter the dark world of a far off mining camp tainted by fear, mistrust, and enslavement—and haunted by men turning into massive, mad wolves without warning. Now, the two must draw upon strength and cunning they never thought they possessed not only to solve the mystery, but to survive. . .

The first book had me hooked on Celine and Analene with their bravery and ability to survive on their own. In addition, the romantic undertones between Celine and Prince Anton and Analie and Lieutenant Jaromir is building slowly across this series and you must keep reading hoping that their budding feelings will eventually be acknowledged.

The author's prologue gives us a glimpse of the frightening situation that will become the mystery Celine and her sister must help solve with the help of Lt. Jaromir and some of his men. Lives are lost and the situation gets worse before it is finally resolved. (Isn't that they way it always goes?!).

As "seers" of Prince Anton's court the sisters are finding themselves embroiled in a plot by Prince Anton's evil brother Prince Damek to sabotage a silver mine owned and operated by their father Prince Lieven. Someone or something is causing the soldiers to mutate into killer "wolves". Not the normal shifter wolves....viscous killing machines that are rampaging through the mining village and soldier's encampment. Needless to say, moral is low and everyone is on pins and needles waiting to see who will be next to suffer from this mysterious malady! Book me on the next flight out of there Scotty!

Will Celine, who can see the future, and Amelie, who can see the past, be able to seek out and identify the culprit before the entire camp is eradicated? Must Prince Anton tell his father that he was unable to put a stop to the mayhem? Will Prince Damek rush in and try to "save the day" to prove to his father that he is the wiser and stronger son? As we see the sisters as two sides of a coin (past and future), we see the brothers as two sides of a coin also...good and evil! As in every fairytale.....GO...good guys!

This adventure, although a great storyline, seemed a little longer to resolve and a lot more "seeing" visions described in detail. I think it might have been abbreviated a little to make the story keep the fast pace but with that being said, the author keeps your attention and has a very fluid writing style. Barb Hendee spins quite the tale. She is a master of character and event descriptions and draws you into her story!

I am hoping the next book brings another great adventure for the sisters and I am really looking forward to some romances to evolve for more flavor. Don't give up......I am sure this episode was just a little more foreplay to build the suspense in the adventures of Celine and Amelie....


Sheep review of Witches in Red by DeniseZ 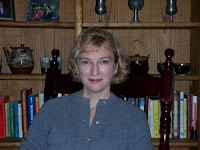 About the author:
website-FB-twitter

Like most writers, I've worked at many jobs in my life, including teaching pre-school until I completed my master's degree in Composition Theory. Between 1993 and 2006, I taught college English while writing fiction on the side, some independently and some with my husband and life-long partner J.C.

Over the years, we've lived in Washington State, Idaho, Colorado, and now moved just south of Portland, Oregon. I love the Northwest, and it's a great place to write.

We have a lovely and talented daughter, Jaclyn, who lives in Houston, Texas along with our wonderful and talented son-in-law, Paul.

J.C. and I sold Dhampir in 2001, which changed our lives considerably. It was published in January 2003, and we've published a book in the Noble Dead Saga every year since. In May of 2006, we were both able to quit our teaching jobs and move into full time writing.

In 2008, I sold the idea for the Vampire Memories series to our editor, Susan Allison, at Roc Books. I am so glad our books have found an audience because I love to write fiction more than anything else in the world... and I'm not really good at anything else.