We're celebrating the audiobook release of BLOOD AND MISTLETOE with a fabulous giveaway.

Just in time for Audiobook Month! 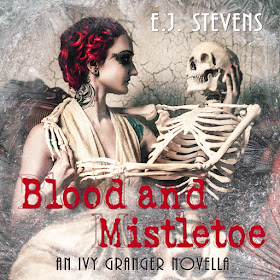 by E.J. Stevens, narrated by Melanie A. Mason and David-Wilson Brown.
Holidays are worse than a full moon for making people crazy. In Harborsmouth, where many of the residents are bloodsucking vampires or monstrous fae, the combination may prove deadly.

Ivy Granger, psychic private investigator, returns to the streets of Harborsmouth in this addition to the bestselling urban fantasy series.

Holidays are Hell, a point driven home when a certain demon attorney returns with information regarding a series of bloody murders. Five Harborsmouth residents have been killed and every victim has one thing in common—they are fae. Whoever is killing faeries must be stopped, but they only leave one clue behind—a piece of mistletoe floating in a pool of the victim's blood.

The holidays just got interesting. Too bad this case may drive Ivy mad before the New Year. Heck, she'll be lucky to survive Christmas.

About the Ivy Granger Series
The Ivy Granger series is an urban fantasy series written by E.J. Stevens. The series is told in the first-person point-of-view of Ivy Granger, a psychic detective with ties to the paranormal underworld of Harborsmouth—ties that ensnare Ivy and her friend Jinx in the Machiavellian schemes of the city's teeming population of bloodsucking vampires and psychotic faeries.

When E.J. isn't at her writing desk, she enjoys dancing along seaside cliffs, singing in graveyards, and sleeping in faerie circles. E.J. currently resides in a magical forest on the coast of Maine where she finds daily inspiration for her writing.

Melanie A. Mason: There has never been a moment when Melanie Mason wasn’t interested in telling a story, either one of hers or someone else’s. She is an accomplished Actor, Director, Audiobook Narrator and Voice-Over Artist. Her voice work includes Web Spokesperson, anime, commercial and film. She holds a BFA in Theatre Performance and an MS in Information Science, with a focus on Storytelling. She has been a University faculty member for over a decade teaching Communication Studies and Broadcast Communication. 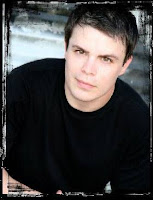 David Wilson-Brown:  Actor, director, and audiobook narrator David Wilson-Brown has been a storyteller since he can remember.  His numerous credits range from stage, to film, to voice-over work for numerous anime and live action projects.  He received his B.F.A. in performance and his M.F.A. in acting.