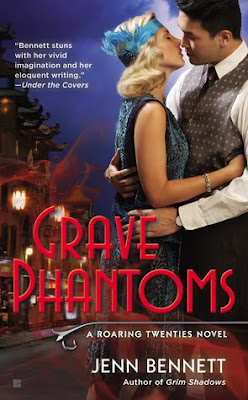 by Jenn Bennett
May 5, 2015
Publisher: Berkeley
Feisty flapper Astrid Magnusson is home from college and yearning for the one thing that’s always been off limits: Bo Yeung, her notorious bootlegging brother’s second-in-command. Unfortunately her dream of an easy reunion proves difficult after a violent storm sends a mysterious yacht crashing into the Magnussons’ docks. What’s worse, the boat disappeared a year ago, and the survivors are acting strangely…

Bo has worked with the Magnusson family for years, doing whatever is needed, including keeping his boss’ younger sister out of trouble—and his hands to himself. Of course, that isn’t so easy after Astrid has a haunting vision about the yacht’s disappearance, plunging them into an underground world of old money and dark magic. Danger will drive them closer together, but surviving their own forbidden feelings could be the bigger risk.

Third book in this trilogy is about the younger sister of Winter and Lowe Magnusson, Astrid. And  the love story between Astrid and Winter’s bootlegging, Chinese second-in-command, Bo. Back from college for the Christmas holidays and knowing how much he means to her, Astrid’s dream of hers and Bo’s reunion is not as easy as she hoped it would be. First, there is Bo himself, trying hard to keep his hands off her body and his lips off hers. Then there is the strange yacht that crashes into the Magnusson’s docks, with confused passengers dressed in white robes an blue paint on their faces. From there things get worse when Astrid joins Bo and a policeman to go onboard so Bo can move it off their land. When Astrid picks up a blue turquoise idol lying on the floor and she is zapped. Now, one man is after her and that idol, and Astrid has visions of what happened on that boat and more. As supernatural terror ramps up, so does Astrid’s and Bo’s passion for each other, unable to deny what they have always felt for one another and still do.

Like comfort food of the finest quality, Ms. Bennett once again delivers a great book in a series that has me addicted. You feel the romantic tension, a thin line between Astrid and Bo, and want them to be with each other, even though in the Roaring 20s, love between an Asian and a Caucasian woman is frowned upon. This is one couple I cheered for and could not put down the book for the supernatural suspense and also for the romantic happily-ever-after you knew they had to get. Signed, sealed and delivered, Grave Phantoms gives the cherry to an icing of delectable reading and a fine ending to a super trilogy.

I give Grave Phantoms 5 sheep

About the Author:
website-FB-twitter
Jenn Bennett is the author of the Arcadia Bell urban fantasy series from Pocket Books and the Roaring Twenties historical paranormal romance series from Berkley. Born in Germany, she’s lived and traveled extensively throughout Europe, the U.S., and the Far East. She currently lives near Atlanta with one husband and two very bad pugs.