Book Review: Crossover (The Chosen One Trilogy: book one) by Mireille Chester 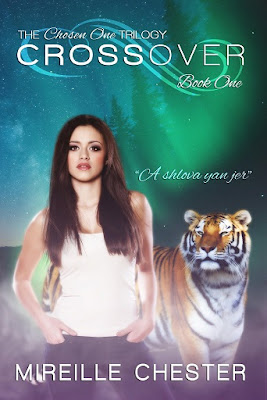 Crossover (The Chosen One Trilogy: book one)
by Mireille Chester
Genre: Fantasy Romance
Publication Date: June 8, 2015
Twenty-three-year-old Hayden Carlson never led an exciting life, but that was how she preferred it. She never expected that an innocent trail ride in the woods would change her life forever.

Suddenly Hayden is pulled into a world she never knew existed and discovers a future awaits her there she isn't prepared to accept...until she meets the mysterious Jasper. Drawn to his quiet, conflicted spirit and entranced by his blue eyes, Hayden finds herself experiencing feelings she has never felt before and wondering where all this might lead.

Hayden's presence in Quelondain creates tension. Amidst constant danger, she finds true love and through it all determines where she will take her stand in the conflict her arrival ignites between good and evil.

If you love fantasy, action, and romance, Crossover-Book One in a debut Fantasy Romance trilogy by Mireille Chester-is for you.

I’ve always loved horses and felt more comfortable around them than anybody else. I was out riding Dodge one day when I found a trail I had never seen before. I didn’t have time to explore but figured I’d go back soon. I could have sworn I saw the most gorgeous guy ever when I was there but he was gone when I blinked. I couldn’t wait to go back. When I returned my world was changed forever.

Good debut book by Mireille Chester. Imaginative story line with many different types of characters that I haven’t seen in this fashion before which really held my interest. Some of the characters and story line could have had a bit more depth to them but all and all a good read. I will be reading the next book in the trilogy.

It’s hard to believe that at one point life had seemed dull, boring, average and uneventful. That was the way I liked it. My life was routine--one day at a time with no extra fuss. Everything I did was so uneventful that, for the most part, I didn’t even dream, or at least I didn’t have any dreams that I could remember. My days followed a simple rhythm. I got up every Monday morning, took a shower, ate breakfast, and headed to school. There, I sat and suffered for eight hours. I was in my first year of classes for veterinary medicine. Now, don’t get me wrong, I loved my coursework. The reason I felt like I was suffering was because those eight hours stood between me and Dodge.


Dodge was my thirteenth birthday present. He’d been a goofy looking weanling with long legs and soft eyes. He’d stood looking up at me from his stall with a big green bow tied around his neck. He was perfect.

You see, I’d been riding since I was eight and begging for a horse since I could talk. Before he’d given me my horse, my dad had told me I had to prove to him that I was going to stick with it. That hadn’t been hard to do. I can’t begin to count the arguments we’ve had about the fact that I spend most of my free time with Dodge.

Dodge is now ten and I’m twenty-three. He has grown into a beautiful, muscular horse and I’m, well, I’m happy with life as it is. Just me and Dodge. It’s not that I’m not interested in men. I’ve had one fairly serious relationship that lasted a year and a half. At least I thought it was serious. When I think back on it now, it’s hard to believe I’d thought he was the most amazing guy. Well, he was, until I loaned him my truck for a weekend and found a very nice pair of lacy underwear that didn’t belong to me under the seat the next day. They say Canadians are sweet, polite, and will forgive anything and everything. Yeah. Apparently, I didn’t get the memo.

I’ve had a few other boyfriends, but most of them didn’t understand why I’d rather go to the barn on a Friday night instead of going to the bar. The thought of going out and being paraded around just isn’t my thing, and I’ll admit that some of it probably has to do with my personal image of myself. I don’t put myself in the “beautiful people” category.

My slightly wavy dark brown hair that falls to the middle of my back is never done. I prefer ponytails and baseball hats. I also don’t have the greatest body. At five-foot-four, I’m kind of thin and seriously lacking curves. Of course, I don’t really dress to flatter, either. My wardrobe consists of Wranglers, t- shirts, and tank tops, though I do own one dress. My dad made me buy it for my cousin’s wedding when I was seventeen. It’s been worn as little as possible since then. I think my best feature is my eyes. They’re a deep green with gold and grey specs and long eyelashes. No mascara for me. Well, no makeup, period. I always end up smearing it because I forget I’m wearing it.

You’re probably getting tired of hearing about me, but I need you to understand one thing before I get on with this story. I’ve always been a loner, that person who is never comfortable around people. Now, don’t get me wrong, I like most people, but I’ve always felt like I didn’t belong. You know, like there was something very important missing.
Then one day everything changed. It was a Friday...

About the Author:
website-FB-Twitter
Mireille Chester is a fantasy author who likes to spend time in made up worlds filled with magic. She is a firm believer that no hero is perfect and that all villains are burdened with a tiny shred of humanity.

Born in Ottawa, Ontario, Mireille now resides in the beautiful prairies of Saskatchewan. Wife and mother, she spends most of her time with her three children and husband. When she is not writing stories or grooming dogs, you can find her on the lake fishing with her family.
Sharon Stogner at 12:00 PM
Share