Book Review: Devil in the Wires: A Field Ops Novel by Tim Lees 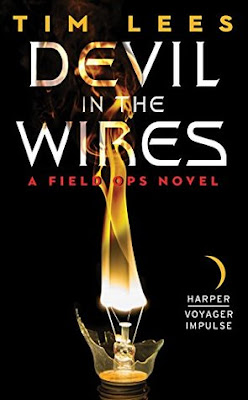 by Harper Voyager Impulse
"It's a perfect circle, Chris. The god receives his audience, the grid receives the power—and we light up Chicago."

After the perilous retrieval of a long-dormant god from Iraq, Chris Copeland—professional god hunter and company troubleshooter—is about ready to quit his job. But his employers at the Registry have other plans…plans to build a power facility on the shores of Lake Michigan. Adam Shailer, a rising star at the Registry, thinks he can cage the god, drain its energy, and power the city.

It's Chris's job to make sure nothing goes wrong. And at first, everything seems fine. Great, even. But when ecstatic devotees start leaving human sacrifices on the beach near the god-house, it quickly becomes clear that the god is not as contained as the Registry would have everyone believe. The devil's in the wires, and there's no turning back now.
only $1.99

This is one of the most original stories I’ve come across in a while. Chris Copeland is a Field Op at the Registry. He goes out to collect ancient power from the land. Places where people have worshiped have an energy that can be captured and used to create electricity. But what exactly are they capturing? And should they?

There is action, mystery, betrayal and a little bit of romance thrown in. Chris is the best at capturing gods and when an old friend offers him a job that is “too good to be true” he knows something is wrong, but can’t pass up the opportunity. Manipulated from square one Chris, an Englishman, finds himself in Chicago trying to connect a god’s power and serial killings taking place in town. Not to mention the ice age conditions that hit Chicago in the middle of summer for a day. Then there is a mistake from his past stalking him.

The story moves at a good pace, but sometimes the dialogue is cumbersome. Making dialogue sound the way someone would actually speak, with all the stops and starts, doesn’t translate well in written form and ends up breaking the flow of the story. There was some repetition and an over use of “OK” and “yeah” in the dialogue.

This book is a great read based on the originality of the storyline.

“There are people who will tell you that gods are nothing without us—literally nothing: that they’re a residue laid down by centuries of worship, of wailing, moaning and wringing of hands. Emotional fallout, nothing more. And there’s truth in that: these are the things that make them strong, that make them grow. But they were here long, long before. They were here before us all.

Rousing one, as I was planning to do now, is like taking a stick and poking at a sleepy bear. Maybe it’ll just roll over and doze off again. Or maybe it’ll yawn, reach out and take your head off.

One other possibility, however, was the one Dayling had held out to me. Maybe, and in what way I could not, so far, imagine—maybe it would want to talk.”

Check out Tim's guest post with I Smell Sheep: Ten things you should know about gods 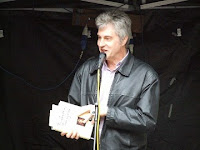 About the Author:
website-twitter-amazon
Tim Lees is a British author now living in Chicago. He is a regular contributor to Interzone, Black Static, and other titles. He is the author of the much praised novel, "Frankenstein's Prescription."
Sharon Stogner at 12:30 AM
Share