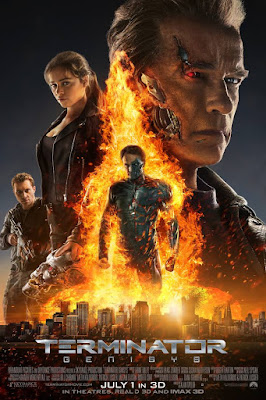 TERMINATOR GENISYS
Directed by: Alan Taylor
Rated: PG-13
Cast: Arnold Schwarzenegger, Jai Courtney, Emilia Clarke, Jason Clarke
Plot:
When John Connor (Jason Clarke), leader of the human resistance against Skynet, sends Kyle Reese (Jai Courtney) back to 1984 to protect his mother, Sarah (Emilia Clarke), from a Terminator assassin, an unexpected turn of events creates an altered timeline. Instead of a scared waitress, Sarah is a skilled fighter and has a Terminator guardian (Arnold Schwarzenegger) by her side. Faced with unlikely allies and dangerous new enemies, Reese sets out on an unexpected new mission: reset the future.


Katie's review
Arnold is back! It's no big secret though, since he said it in Terminator 2. Plus probably every other movie he's ever been in. The Austria man is a genius at one liners. I love it and love every cheesy muscled bit of him. The latest edition of the robo human haters was entertaining and CGI spectacular. I'm loving all the summer movies this year in the San Francisco bay. Shout-outs to my area!

Time travel timelines get a tad bit confusing, who was sent when and why? What the heck was going on at the very end and will we ever know the winner of this bot war? Well, who knows but you get what you get with this one.

I love the actress Emilia Clarke, and she's awesome in Game of Thrones, but let's compare her to Linda Hamilton who played Sarah Connor. Emilia was not that badass, ripped out fighter chick who busted physic wards melons. She's got a soft baby face and not those sharp edges you would expect a chick who knows what these machine feckers can do. I was disappointed she didn't get more into the role, this time around the character Sarah is much more reliant on her robo Pop to get her through life.

Overall, I was impressed when I thought this installment would just be another let down. The older actors in Hollywood tend to get pushed aside and forgotten sometimes, Arnold shows us that no matter your age you can still kick ass and take names!

Getting 4 'bad boys, what ya gonna do' Sheep

Sharon's review
I saw it with my husband and 14 year old daughter. Don and I have seen all the previous Terminators, Holly has not. She wasn't all that impressed with it. She loved all the CGI effects—they blow a lot of s*** up. But she doesn't really like the robots take over the world idea. She also was confused by the time line shuffling they did. At the end there are two time lines still happening and one of them should have disappeared, but it might have because of the last scene (you got to stay past the first part of the credits for that extra scene.)

This left movie left me torn. I wanted to love it, but there were a few things that bugged me. The story line twists they came up with to make it work with the earlier movies was fantastic. I would give it 5 sheep for that and the visual effects, but...I wasn't impressed with the execution of it. It seems like they cut corners on paying their script writers in order to pay the special effects people more.

Another big problem for me was picturing the "new" Sarah Connor and Kyle Reese. My brain just didn't want to accept those actors in such iconic roles. Especially Emilia Clarke. She looks barely 16. Kind of hard to accept her as Sarah Connor. Jason Clarke as John Connor was an easy sell.

I didn't feel like the one liners were well timed. They felt forced into the dialogue because they had to be there.

If you are interested in just the story line then there is no reason to see this on the big screen, but if you love special effects/great CGI then you will want to see it at the theaters.