Book Review: Even Vampires Get the Blues: A Deadly Angels Book by Sandra Hill + giveaway 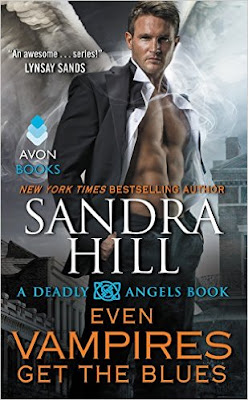 Even Vampires Get the Blues: A Deadly Angels Book
by Sandra Hill

The fact that vampire angel Harek Sigurdsson was a Norseman in his mortal life doesn't make thawing out after exile in Siberia any easier. But things heat up when his search for evil Lucipires connects him with Camille Dumaine, a human who thrums with sensual energy that can mean only one thing: she's the mate Harek's been seeking for centuries . . .

The SEALs call her "Camo" for her ability to blend into a crowd—yet Harek's intense blue gaze singles Camille out like a white-hot spotlight. The security wiz was hired to help bring down a ruthless band of international kidnappers, but Camille senses an unspoken agenda—besides Harek's bold declaration that she's his "destiny." Just Camille's luck that the sexiest man she's ever met may also be . . . a vampire!

I freely admit to being a cover whore and this story sure has one hell of a whore worthy cover! Based on just the smexy cover alone, I had to check this pnr out. It sure helped that our main alpha-man is a viking vampire angle. Yeah, you read that right! Why pick just one paranormal thing, do a combo pack for extra fun.

While I haven't read any of the previous stories in this saga, I didn't have a hard time getting all caught up on the viking vamp world. It was odd to have vampires as angels, but I give huge respect for authors trying new things. You have to think outside the box sometimes, and this is one of those cases. So the vikings need blood to live but they also can go into the light AND sometimes they have wings.

All the extra stuff aside, there was a really good story written here. Our Navy Seal chick was deadly and fun, she had soft parts to her and tons of personality. I would have liked to see her kick more butt, especially at the end, but overall she was developed and written well! Teaming up with a sexy vampire angel sure did help. Harek may have a hard to pronounce name, but that didn't stop me from enjoying his aspects.

Overall, this was a entertaining read with downhome moments and unexpected real life snippets. I liked it, a whole lot. If you're looking for an action packed tale with romance and dialog layers to feast on, the grab this one! 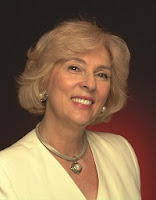 About the Author:
website-FB-mailing list
Goodreads
Sandra Hill is a graduate of Penn State and worked for more than 10 years as a features writer and education editor for publications in New Jersey and Pennsylvania. Writing about serious issues taught her the merits of seeking the lighter side of even the darkest stories. She is the wife of a stockbroker and the mother of four sons. 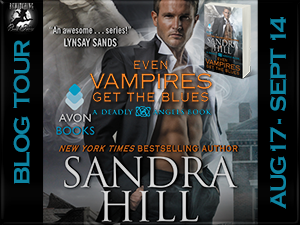