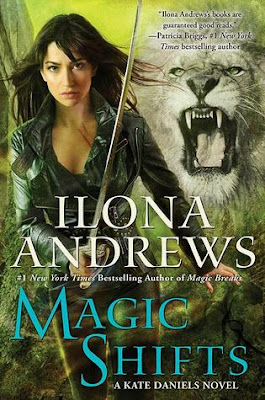 Hardcover, 400 pages
August 4th 2015 by Ace
In the latest Kate Daniels novel from #1 New York Timesbestselling author Ilona Andrews, magic is coming and going in waves in post-Shift Atlanta—and each crest leaves danger in its wake…


After breaking from life with the Pack, mercenary Kate Daniels and her mate—former Beast Lord Curran Lennart—are adjusting to a very different pace. While they’re thrilled to escape all the infighting, Curran misses the constant challenges of leading the shapeshifters.

So when the Pack offers him its stake in the Mercenary Guild, Curran seizes the opportunity—too bad the Guild wants nothing to do with him and Kate. Luckily, as a veteran merc, Kate can take over any of the Guild’s unfinished jobs in order to bring in money and build their reputation. But what Kate and Curran don’t realize is that the odd jobs they’ve been working are all connected.

An ancient enemy has arisen, and Kate and Curran are the only ones who can stop it—before it takes their city apart piece by piece.

This series never gets old. You would think after 8 books things might get a little "meh." But Magic Shifts is as fresh and exciting as every other book in this series. If you aren't reading this series, you need to go sit in the corner. I've left a copy of Magic Bites (book 1) for you.

Kate and Curran have started a new chapter in their lives and the punches keep coming and they keep rolling with them. I'm glad we are seeing a bit more of Roland. I like him, in a that evil bastard needs to die, but not yet way. By the end of the book we know what his end game is, but Kate has matured through out this series and she is ready to do this the right way...I hope, she is Kate after all <G>.

Still full of humor, mystery and lots of historical information about the latest big bad to invade Atlanta. While I could have done with a little less of the knife history lessons, I'm sure others appreciated it.

Fun scene:
[Kate] "I thought you might be injured."
He [Curran] looked at me "We've met, you and I?"
I deliberately took a big step back.
"What?" he growled.
"I'm making room for your ego."
"Fine. I should have left a note!"
"You should've."
"Answer me this, did you hesitate at all or did you see the giant, go 'Wheee!' and run toward it?"
"She ran toward it." Juke quipped.
"He was biting people in half."
"I rest my case," Curran said. "A note wouldn't have made a difference."

P.S. I still want to be Kate Daniels when I grow up. 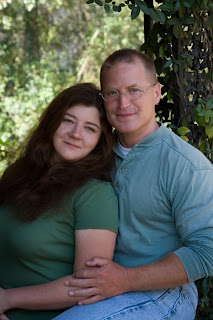 About the authors:
website-FB-twitter-blog
Ilona Andrews is the pseudonym for a husband-and-wife writing team. author2sm“Ilona is a native-born Russian and Gordon is a former communications sergeant in the U.S. Army. Contrary to popular belief, Gordon was never an intelligence officer with a license to kill, and Ilona was never the mysterious Russian spy who seduced him. They met in college, in English Composition 101, where Ilona got a better grade. (Gordon is still sore about that.)

Gordon and Ilona currently reside in Oregon with their two children, three dogs and a cat. They have co-authored two series, the bestselling urban fantasy of Kate Daniels and romantic urban fantasy of The Edge.
Sharon Stogner at 1:00 PM
Share