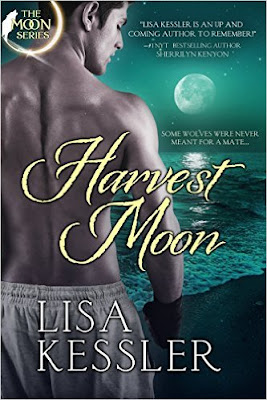 Harvest Moon (The Moon Series #4)
by Lisa Kessler
Genre: Paranormal Romance
Entangled Select Otherworld
ASIN: B014CR0OES
Dr. Jason Ayers unleashes all of his rage and his frustration through fists and brute force in an underground boxing ring. The werewolf may be the pack’s doctor, but he can’t even heal his coma-stricken father after the Nero Organization’s attack stopped his heart. And as his Pack brothers settle down around him, he still refuses to believe in the fairy tale notion that every wolf has a true mate...

In hiding and on the run, nurse Kilani Akamu is a loose end that Nero is desperate to tie up. She can't afford to be attracted to a doctor—especially one as unexpectedly hot and complex as Jason. Yet the sexual sparks arcing between them are undeniable...and Kilani's precognitive senses warn her that temptation is inevitable.

Swoon worthy werewolves fighting to protect their pack from an evil organization bent on destroying them. With true love and steamy sex scenes, what more could you ask for? The next Moon Series book to come out of course!
- RPriestEllgyCo

I love every book I have read by this author; the Moon Series is no different. An exciting run with shifters, science, and sexy sizzle. - Cosmic Palate Reviews

Author's Note –
While all of the books can be read as standalone novels, you may enjoy reading the rest of the series as well.


With his father in a coma that he can’t cure, Dr. Jason Ayers takes out his anger and frustration in an underground boxing ring. Adding to Jason’s frustration is watching all his pack brothers settle down with mates even though he doesn’t believe that every wolf has a true mate.

In the meanwhile, nurse Kilani Akamu is on the run from the Nero Organization, which to be honest, even now that I’ve finished Harvest Moon I’m still not entirely clear as to who or what Nero is and what their main objective is other than to kill shifters and the occasional person. Anyway, Kilani is on their radar for some reason or another and therefore has some series trust issues.

The irony is not lost on me that a doctor dedicated to saving and preserving life beats the snot out of others in an underground boxing ring in his spare time. Jason is all kinds of tortured, wolfy goodness! Surprisingly even though he’s a tad on the grumpy and short tempered side, I found it really worked for Jason and for the overall story. No one likes a perfect shifter who also happens to be a doctor, but as a doctor he had a bit of an ego going when it came to anything medical and did I mention he was hard headed too? Yeah, he tended to act first, think later which sometimes made difficult situations almost impossible. I couldn’t fault him for that though, Jason took everything personally, especially failures. His deep sense of responsibility for those he cares about was one of his most defining traits.

Jason definitely needed someone like Kilani as his mate for the above mentioned reasons. First of all, how neat is her name? I love that name! Second, she was a call ‘em like I see ‘em woman. She was blunt with Jason which seemed to be the only way to get through his stubborn personality. She may have been running from and organization out to kill her but that didn’t mean Kilani was going to duck behind the first stud who caught her interest. She was her own person and didn’t let Jason push her around. My favorite kind of heroine. She could be a little naïve at times and that made me question how she managed to keep out of Nero’s grasp (Dumb luck I guess) but she was a fast learner on how to watch out for herself.

Harvest Moon is told in first person, alternating between Jason and Kilani, which I didn’t know until I started reading. It’s not my preferred style to be honest because while I enjoyed getting into Jason and Kilani’s heads, I feel that “seeing” through the eyes of only certain characters takes away the experience of getting to know the secondary cast or of getting a clear picture of certain situations. It feels like I’m just getting one side of the story. Still, Harvest Moon did entertain me and I liked Jason and Kilani enough to not let it bother me so much that I was only inside their minds.

It’s a solid story to be sure, I liked the dynamic between Jason and Kilani and the way they worked well together to hold their enemy at bay. Of course, no paranormal romance is complete without the requisite startling revelation and Harvest Moon definitely had that. Fans of this book will definitely want to know more about Nero and its connection to Jason and Kilani’s friends. 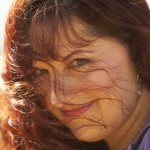 Her short stories have been published in print anthologies and magazines, and her vampire story, Immortal Beloved, was a finalist for a Bram Stoker award.

When she's not writing, Lisa is a professional vocalist, and has performed with San Diego Opera as well as other musical theater companies in San Diego.