Book Review: On a Witch and a Prayer: A Wicked Witches of the Midwest Short by Amanda M. Lee 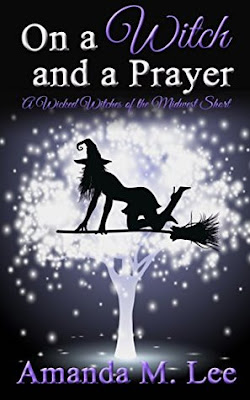 On a Witch and a Prayer: A Wicked Witches of the Midwest Short
by Amanda M. Lee

Kindle Edition, 91 pages
Published July 14th 2015
by WinchesterShaw Publications
FBI Agent Landon Michaels is looking forward to a weekend of fun and ease with his witchy love, Bay Winchester. Unfortunately for him, relaxation isn’t in the cards.
When his boss hands him a cold case from Hemlock Cove before he leaves for an extended weekend, Landon is annoyed. When Thistle Winchester gets a vision from the file, bother turns to intrigue.
If Landon can solve a twenty-year-old disappearance he’ll be lauded in his office as more than the guy who is dating the woman who constantly finds trouble. Of course, it’s that woman and her feisty family who can help him.
Between ghosts, fights, deep conversations with Marcus, and constant annoyances, Landon has his hands full. And that’s on top of Aunt Tillie’s new business venture – which she’s desperately trying to keep under wraps.
Landon needs Bay to solve a mystery, and her family is along for the ride. Danger might not be prevalent this weekend, but survival is – and old ghosts need to be put to rest.

Note: This is a short novella set in the Wicked Witches of the Midwest world. It is approximately 25,000 words, and will not take the place of regular installments in the series. It’s just a short snapshot so you can get to know some of the other characters in Hemlock Cove. Thank you for reading.
amazon buy link

For anyone who love witches and snarky humor and has not read Amanda Lee's stories you are missing out on some of the best writing and snark I have ever come across. I can't read any of her books without LOL (that's laughing out loud in computer shorthand! DUH) Her fluid style makes you think she has first hand experience with these unique and sometimes crazy ladies. As a matter of fact I would love to ask her where I could adopt my own Aunt Tillie!

Bay Winchester is a newspaper journalist and part of an ever enlarging family of witches. Her boyfriend is an FBI agent who is NOT from a family of witches. Enter Bay's Aunt Tillie who is not above skirting just this side of legal shenanigans and this is where the humor and "snarkiness" begins. Add in Bay's two female cousin witches and all three of their mothers and there is not a safe place for any man around the area. There is always a mystery to solve, some heartwarming romance and a lot of hysterical family dynamics in play with Ms. Lee's "Witches of the Midwest" books.

I have read almost all of these stories and each time I leave and come back to one I am immediately addicted all over again. Calgon...take me away to Hemlock Cove! Do yourself a favor, pick one of these up. I bet you can't eat just "one"!

I give this 5 "belly laughing" sheep

About the Author:
FB-twitter
When I was a kid, I was torn between whether or not I was going to grow up and be the Incredible Hulk or Wonder Woman. I flirted with being a Jedi Knight for awhile, but I wasn't up for the intense travel associated with the gig. In my teens, I settled on being a writer -- although I had no idea the effort that would entail.

Not only am I a writer now, but I'm a writer in several different mediums. I'm a longtime newspaper reporter, an avid reader and a voracious science fiction fanatic.