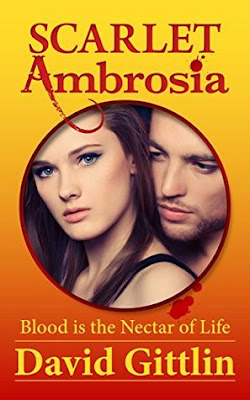 Scarlet Ambrosia: Blood Is The Nectar Of Life
by David Gittlin
Kindle Edition, 231 pages
Published November 5th 2014 by
Entelligent Entertainment
How does a nice Jewish accountant tell his parents he’s become a vampire? If only that was his biggest problem.

A one night stand, an error in judgment, a wrong turn—no words can describe the events that thrust Devon Furst into the arms of a beautiful vampire lover.
The violent aftermath of that fateful night threatens to burn Devon’s eternal life down to ashes and endangers the lives of everyone close to him.

Everything in Devon’s life changes in the span of a few hours. When he asks Mathilde de Roche one too many questions, the troubled vampiress has no choice but to offer Devon two terrible alternatives: Death or life as a vampire. For a man aged twenty-eight and in perfect health, death is not an option. Mathilde’s alluring beauty makes the decision and her vampire blood easier to swallow.

Devon must leave behind everyone and everything he holds dear, to face a future full of uncertainty, and a five-hundred-year-old enemy endowed with super-human powers.
Book Trailer: https://youtu.be/nGNXhQ-pUeI
Available at Amazon BN iTunes

"A nice young Jewish boy walked into a bar...". The whole reason Devon found himself faced with the nightmare that has become his existence! A mild mannered accountant finds himself enticed into a "one night" stand that changed his whole interpretation of exchanging bodily fluids. Instead of walking away in the morning, no questions asked, this nice young man is determined to find out why this beautiful women picked him to "quench her thirst" for a sexual rendezvous. Kind of like the old saying: "If I tell you, I will have to kill you." Well, curiosity DID kill the cat! Devon now finds himself with eternal life and is not sure he likes it.

Very enjoyable story about a mere mortal suddenly having "super" powers gifted by a beautiful vampire with a very jealous and unscrupulous boyfriend. Needless to say, the boyfriend is non too happy with Devon on many fronts and would like to see nothing more than his demise.

Devon's brother in law just happens to be the accountant for this jealous boyfriend (Ergon) who owns and operates an black market "blood bank" and Devon just happens to be present when Ergon kills him for trying to cancel his employment contract. Needless to say, " the fight is on" for Devon.

Danger, violence and more romance ensues as Devon enlists humans to assist him and his beautiful vamp lover rid the earth of this psychotic scumbag! I particularly enjoyed Devon's interaction with the FBI agents! Aliens!? Indeed! Holy cow, those agents had to have been thinking they entered the "Twilight Zone".

There was a short period of time in the middle of the story I thought "OK, get on with it" but for the other 90% I was totally engrossed in the story. I thought the ability to revert back to human a nice touch of inspiration. It gave me pause to consider whether or not Devon would utilize this option and whether, faced with the same situation, I would choose to be returned to the mortal life! I won't spoil it for the readers so I will leave this here. If you find yourself with a sudden unquenchable thirst Do NOT stop at the nearest bar. Go home, go directly home, do not pass Go, just go straight home!

I give this book 4 "confused but brave" sheep.

About the Author:
website-FB-twitter
blog-G+
After a career in marketing communications, David Gittlin wrote screenplays before turning to novels. His first novel, “Three Days to Darkness,” was a recent nominee to the James Kirkwood Prize for creative writing. “Scarlet Ambrosia” is his second novel. He lives a quiet and happy life in Aventura, Florida with his wife, Bonnie.

GIVEAWAY
25 ebook copies in mobi or epub format to the first twenty-five people who sign up via google docs
Enter here: https://goo.gl/nYiOM7
Sharon Stogner at 12:30 AM
Share