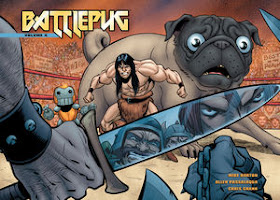 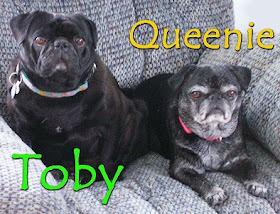 Queenie --- Are you kidding me? It has pugs! It even has a pug MOUNTAIN this time! Automatic five!
Toby (from under the couch cushion) --- Yeah, it should be five!
Dani (sighing) --- We have this argument every time we review a Battlepug book. Look, if we were reviewing it for a pug audience, it would be five. But we’re reviewing this for humans, so it gets four.
Toby --- I’ll bet if the Battlepug was here, you’d give it a TEN!
Dani --- Okay, that’s probably true. Tell you what, I’ll give FIVE “pug-kisses-are-totally-unavoidable” sheep to the bonus pages in this book. There’s a fun collection of the Warrior and the Battlepug drawn by over a dozen guest artists.