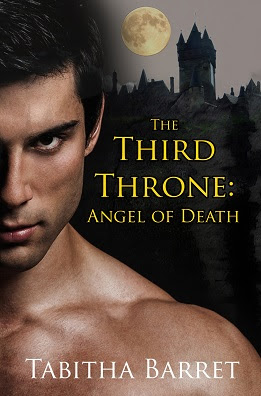 Angel of Death (The Third Throne Series #2)
by Tabitha Barret
Genre: Paranormal Romance / Urban Fantasy
Publisher: Heather Baker
Date of Publication: 7/31/2015
ISBN: 1514847507
ASIN: B00XOJ09Z0
Number of pages: 530
Cover Artist: Heather Baker
Anjali has embraced her destiny to end the world, but now she must find her ten Harbingers, known as the Predznak. She is determined to find Alazar, the Angel of Death, the former leader of the Predznak, before the other angels. She fears that he has lost hope and is close to becoming a Rogue Angel.

Alazar has spent too many centuries waiting for his Master Anjali to come and claim him. Deception and lies have kept them apart, but now it’s too late. He has vowed to the other Predznak that he will kill their Master so that they can be free.

During her search for Alazar, Anjali meets the Spirit Experts, paranormal investigators who are on a collision course with the Angel of Death. Anjali finds herself strangely attracted to one of the Spirit Experts and decides to become a part of their group in an effort to keep them safe from her dangerous angel.

Can Anjali stop Alazar from killing the Spirit Experts and destroying the surrounding town? Can she keep Lucifer in the dark about her affections for the mortal man? Will unseen enemies destroy all that Anjali holds dear?

The Third Throne: Angel of Death is the second book in the steamy Adult Urban Fantasy and Paranormal Romance series.

Excerpt: Anjali felt the temperature of the room drop until ice particles formed from her breath. The world around her fell away and went silent. The only sound she could hear was her heartbeat. At first, it was strong and steady, but the tempo slowly changed until it sounded like waves crashing on a beach. A brilliant blue filled her vision and she saw the ocean waves rippling and dancing in front of her. She could practically feel the sand between her toes. It was a peaceful sight. All of her worries were gone and she breathed a sigh of relief. She no longer had to worry about destroying the world and killing everyone. Staying here in this serene place would be wonderful. There would no longer be blood on her hands and the fate of the world would be someone else’s problem. She could just drift away with the tide and be free.She knew this feeling. It was simple and easy to understand. If you let go of your worries, you will find happiness. She sighed, wanting to be happy.Happy? The thought floated to the surface of her bewildered mind. There was no such thing in her life. She was a servant of Lucifer, of Hell. Angels were meant to bow to her command and do the will of God through her. Something was wrong. She wasn’t destined to be happy, nor was she at the beach. She was in a cold, dark place without oceans and sand. Romania. She was in Romania with Alazar, her Angel of Death, and he was tempting her with his power.The storm that dwelled inside of her, just below the surface, welled up as it recognized the feeling of death. It yearned to reach out and touch Alazar’s power. It felt familiar, but not because she had experienced death before. It was familiar because it was a part of her, a missing piece. Her power reared up and clawed at her insides. It fought to reach Death and welcome him home. The only thing holding it back was her ring. She used her thumb and carefully wiggled the ring off her finger until she heard the small sound of metal hitting stone. Plink.“Enough!” she screamed, letting her power rush to the surface.Alazar was perplexed by her scream. He thought he was winning. She had seen the ocean and had become complacent in her thoughts. What was happening? No one ever broke free of his control, unless they resisted the temptation, which was rare. He never let them escape. He never backed down from his temptation of a person, until they were dead. Something felt dishonest about that as he watched Anjali break free of the vision.It’s wrong to push people beyond their breaking point, he thought, just before he felt the air stir.He tried to release her face, but couldn’t move. He knew he was in trouble when her blue eyes turned black and glowed with power. 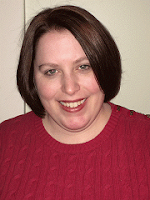 About the Author:
Website-FB-Twitter
FB Fan Page
Blog-Goodreads
Tabitha Barret graduated from Rutgers University with a BA in English. She married the guy from her Creative Writing class and together had two amazing children. They live in a quiet town in New Jersey with their three rambunctious dogs. She is currently working on her series, The Third Throne.
Sharon Stogner at 12:30 AM
Share