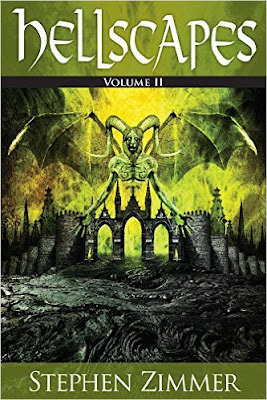 by Stephen Zimmer
132 pages
Return to the nightmarish, shadowy realms of Hell in the latest installment of the Hellscapes series by Stephen Zimmer. Six brand new, macabre tales of the infernal await you … but be sure to only visit these realms, you do not want to share the fates of the inhabitants that you will encounter!

Included in the pages of Hellscapes, Volume II:

In “The Cavern”, a man finds his way into a nightmare, subterranean world that leads to an even greater, and more devastating, revelation.

A woman finds herself stranded on a high, rocky ledge, along with many other men and women, surrounded by a frothing sea in “The Deep”. Shadows glide beneath the surface and soon she will discover what lurks within the depths.

A police officer takes pleasure in violently executing his duties and it appears to be open season in “The Riot” when he is part of an operation sent to crack down on a gathering of people protesting an economic summit nearby. But this is an operation that is going to take a very different kind of turn, one that opens his eyes to a new reality.

“Returning Home” tells the story of a man who has never had any qualms lying, cheating, or deceiving the women in his life. A reckoning day looms as he comes to understand that his actions have harmed the lives of many others, actions that in the realms of Hell take on forms of their own.

Having spun webs of intrigue and personal destruction at the heights of national politics throughout his life, a man finds webs of another sort to present grave danger when he finds himself lost within a strange wilderness in “The Politician”.

Many are drawn to “The Club” in the heart of the decaying, shadow-filled city of Malizia, hoping for some entertainment and release, or even safety from the monstrous dangers lurking in the darkness. One man struggling against amnesia finds his way to the seemingly popular establishment and its confines give him momentary hope; until he discovers the nature of this night club and those who run it.

This is Zimmer's second collection of Hellscape horror stories. Dante had his nine circles of hell. Depending on your crime you would find your soul tortured in one of them. Zimmer has his Hellscape, a world where the lost stumble in terror and confusion until they find their rightful place and begin to physically pay for crimes committed during their lives. Only once the pain starts do they realize why they are there and what eternity holds for them.

This is not for the faint of heart. The Hellscape holds all the monstrosities Zimmer could think of, and torture (there is no death in this place) comes in many forms, mostly likely the rendering of flesh. Each story is about a person who has committed injustices directly or indirectly against humanity. Be it political or social.

While there is a lot of gore, it isn't written like spatterpunk shock material. Zimmer is eloquent in ways you don't find in horror stories as much anymore. He slowly paints a vivid scene that becomes more horrific as the story builds.

Another solid read from Stephen Zimmer. 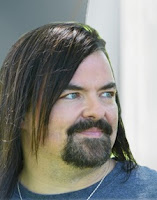 About the Author:
website-FB-twitter
Award-winning author and filmmaker Stephen Zimmer is based out of Lexington, Kentucky. His works include the Rising Dawn Saga, the Fires in Eden Series, the Hellscapes and Chronicles of Ave short story collections, the Harvey and Solomon steampunk stories, and the Rayden Valkyrie Tales. Stephen currently resides in Lexington, Kentucky.
Sharon Stogner at 8:27 AM
Share