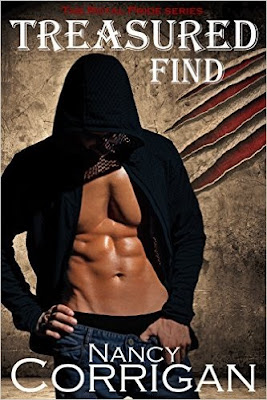 Treasured Find (Royal Pride #1)
by Nancy Corrigan
ASIN: B016LI22XC
Length: 92K
November 11th 2015
Pages: 329
After five centuries, Rafe Alexander knows what to expect from life--boredom broken by the occasional call from Shifter Affairs. No matter how mundane the job, he always accepts their plea for help. He knows what it's like to lose loved ones to the shifter trafficking rings decimating their species.

But the task that takes him to West Virginia changes everything. A human is dead. A shifter child is missing. And the human female connected to both tragedies is hiding a secret.

He needs to discover the mystery surrounding her. But the felines he houses--lion, tiger and jaguar--want him to get close to her for another reason. Jasmine is special, both for how she affects him and for the treasure she's been guarding.

And as danger mounts, he's left balancing his desire for revenge and his need to protect. But the line between them isn't always black and white, especially where his family is concerned.

This book was previously released. It has been revised and re-edited..
amazon-Goodreads

NOTE: The Royal Pride series is set in the same world as the KAGAN WOLVES series.

Rafe Alexander is a shifter who houses three felines – lion, tiger and jaguar. He has lived for five centuries and works for Shifter Affairs. As part of Shifter Affairs, a government agency, he helps stop shifter trafficking rings where shifters are kidnapped for numerous different uses and none are pleasant.

This book was hot and steamy and the passion between Rafe and Jasmine was explosive! Rafe is everyone woman’s dream of unimaginable great sex. If you aren’t one to like a nice, long sex scene than this is not the book for you. But for those of you that have a good imagination than you will love the romance in this book.

“Don’t get any crazy ideas. I am not going out with any of your husband’s friends. No more blind dates, thank you very much.”

“You don’t need any help from me. Once you drop the ‘stay away from me’ glare you usually wear around members of the opposite sex, you’ll have no problem picking up a guy.” Cindy tapped a single finger against her chin. “We might even have to beat them off you, especially if you display your goods a little more.”

She tugged at Jazz’s shirt until the lacy edge barely covered her nipples.

Jazz gasped and slapped away her friend’s hands. She quickly righted her top and glared at Cindy. Jazz hated her goods. Her breasts were too big for her frame, but genetics was a crapshoot. You got whatever the DNA mixing bowl dished out.

“Stop it. I am not enticing any lewd perverts with a showing of my goods.”

She bit back her sharp retort. Cindy meant well. It wasn’t her fault Jazz had to keep men at arm’s length. It wasn’t Jazz’s either, but those were the facts. Time for another lie. What was one more?

“Fine. The next hot guy who shows any interest in me…” I’ll ignore just like I did with the blond hunk Josh was talking with.She inwardly rolled her eyes at the ridiculousness of her lame fib. “…will be the one I take home.”

Jazz pivoted. A wide expanse of muscle filled her vision. She followed the ridges of his stomach lower. His narrow waist met lean, denim-covered hips. Openmouthed, she stared at the growing bulge in his pants. An answering spark of arousal lighted within her. Shivers of awareness, the same ones that had skipped down her spine a few minutes ago (omitted last part of this sentence because this is a PF-13 site and OH DEAR!)

She glanced into his face. Exotic, uptilted honey-brown eyes were framed by long blond lashes. Beautiful and downright captivating.

His full lips, parted slightly, glistened as if he’d licked them. She swiped her tongue across her suddenly dry ones.

“Am I hot enough for you?” He rubbed his thumb over the corner of her mouth. “Because I’m interested. Very, very interested.” 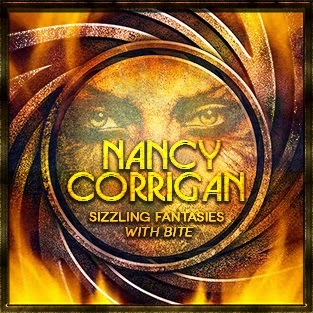 About the Author:
Website-Newsletter-Pinterest
Facebook Friend-Facebook Page
Amazon Page-Blog-Google
Tumblr-Twitter
A true romantic at heart, Nancy Corrigan is convinced there’s a knight in shining armor for every woman (or man), but you won’t find damsels in distress in her stories. She adores pairing alpha heroes with women strong enough to match them and bring them to their knees. She also enjoys flipping the traditional roles in romances because her motto is—love and people should never be forced to conform to anyone’s norm.

She holds a degree in chemistry and has worked in research but now focuses on ensuring quality. She considers it the perfect outlet for her as she’s the first to admit she has some OCD tendencies. It carries over into her writing life too. While engrossed in a novel, she has a habit of forgetting to eat and sleep. Fortunately, she’s married to her own knight in shining armor who understands her oddities and loves her anyway. They reside in Pennsylvania with their three children, dog, snake and guinea pigs. Her other interests include tattoos, animals, classic cars and all things spooky and sexy.
Sharon Stogner at 12:00 PM
Share