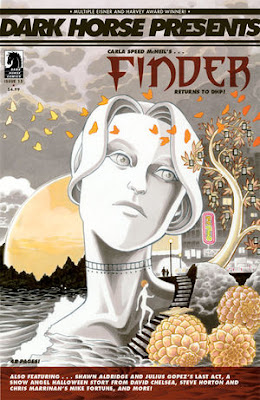 “By providing creators with a forum for creative expression for almost 30 years, Dark Horse Presents ensures that while the comics anthology may never be as prevalent as it once was, it will always have a place in the medium.”—Kabooooom


I’ll admit that I leapt at this title because I have an unapologetic, selfish need to read Finder as fast as possible, but this title has been the gift that keeps on giving. I felt myself drawn into all of the titles, and I’m definitely going to keep reading the ones I’m not familiar with. 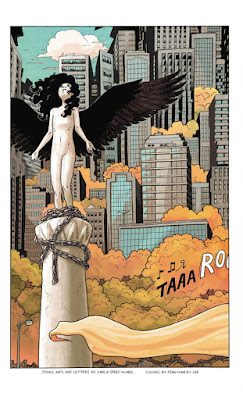 Finder – This story opens with the Preceptor’s appearance at the library to read what’s presented to him: a single piece of paper in a briefcase. Like so many parts of Finder, not only do moments like this make me wonder about the world Carla Speed McNeil’s creating, but also makes me think about the nature of knowledge and story, itself. On the whole, I probably actually wouldn’t want to live in her world because my luck I’d be smacked with something horrible pretty fast, but part of me really, really wants to try, anyway, because if I got smacked with something horrible it would probably be equally beautiful and compelling. The Preceptor’s conundrum is palpable – you can feel his confusion and desperation, and the way his perceived shortcomings are played off makes this piece more compelling. 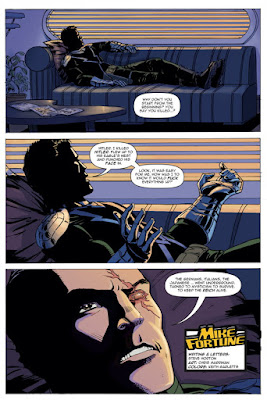 Mike Fortune - When you open with a character on a therapy couch saying how his killing Hitler screwed everything up, I’m going to pay attention. A flashback explaining how Mike Fortune went into hiding afterwards but learned to fight magic with weapons is concise, tells what we need to know, and epic. I want to use this as an example on how to flashback, truly. That coupled with more monster fighting, and this is just a great, eye-catching, fun read, as well as an example of how much can be done in a few pages. 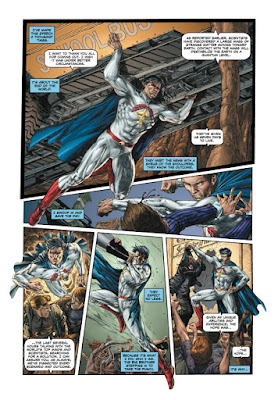 Peacekeeper – When the world is given seven days due to an outside threat, everyone turns to Peacekeeper because he’s saved them time and again. Only this time, he can’t, and he announces this via press conference. It’s a theme that’s been explored in other places – the threat that the superhero just can’t fight – but I haven’t seen it quite at this level, with this kind of unravelling. The emotion is intense and palpable, from a little boy asking if there’s any way he can help, to Peacekeeper watching the public fall apart in worldwide riots and knowing the news he’s given is a huge cause of it. He still tries to calm things down because that’s what he does, but when public opinion is against him and there’s no way to stop the overall threat, can he blame them? It’s not just about people directing their anger at him, though, but his feelings of helplessness and uselessness. The last two pages are powerful and haunted me for hours after I read them. 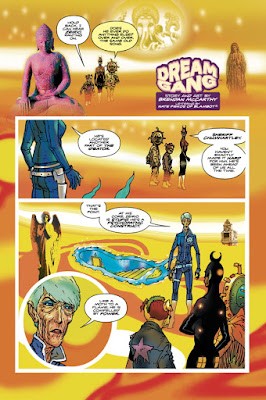 Dream Gang – This one finds a group of eclectic characters under Sheriff Chumhartley pursuing Zeirio as he enters the cosmic realm. This story felt the most like I was coming into the middle of something, but I’m not mad about it. I’m intrigued by what Zeirio’s trying to pull off/accomplishes, as well as what Terry is to Patrick as a dream bomb. The art is gorgeous in a fantasy/sci-fi way, the story fast-moving, and I felt empty for Patrick by the end. This is the power of a good story – no matter where you come into it, if it makes you want to look it up and learn more about it and catch up on what you’ve missed, then it’s done a fabulous job. 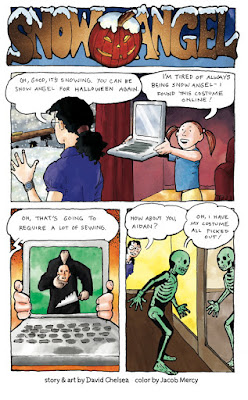 Snow Angel – Halloween is upon us and Snow Angel wants to be something creepy instead of relying on her Snow Angel guise, even though snow is predicted for the holiday. This reminds me of something I’d have loved as a kid. The interaction between Snow Angel and her family is cute, plus hi, little girl hero character. Come the big night, not only are there a bunch of Snow Angel fans dressed up as her, but people in the neighborhood need her help. It’s a cute, well-drawn title that also serves as a good Halloween PSA, while still serving up a fun story. 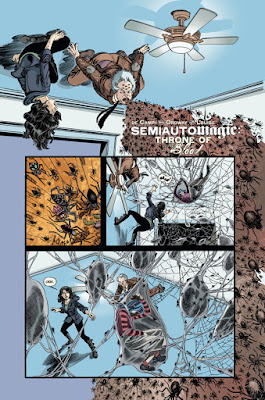 Semiautomagic: Throne of Blood – This is another one I’m coming into mid-story, but I now want to read more. I mean a guy spewing spiders, a badass female lead rescuing a girl and sealing the threat in a holding dimension, then showing how she uses magic to not only try to solve an ongoing mystery but clean up after the drama that’s just gone down? Sign me up. Her train of thoughts tracking the threat at hand were interesting, and the way the narrative followed the victim to an unsettling ending sequence definitely makes me want to check this title out and find out what I’ve missed out on so I can catch up for the future.

Overall, this is a strong collection of different, but intriguing stories. I don’t know that I could actually put any above the other, partially because some are new to me, but also because they’re all that good on their own. This is why anthology titles like this are fantastic – you can peruse a variety of titles in one sitting, and be exposed to things you may not have found on your own. The art for each title is eye-catching and serves the style of the story, and I really can’t find any complaints or critiques about any of them.

As a collection, five sheep, but I’d actually give each individual story five sheep, as well.