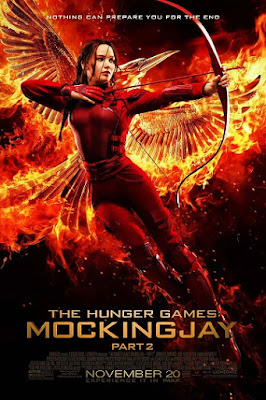 PG-13, 2h 17m
Fantasy/Science fiction
Lionsgate Films
official website
Realizing the stakes are no longer just for survival, Katniss Everdeen (Jennifer Lawrence) teams up with her closest friends, including Peeta (Josh Hutcherson), Gale (Liam Hemsworth) and Finnick for the ultimate mission. Together, they leave District 13 to liberate the citizens of war-torn Panem and assassinate President Snow, who's obsessed with destroying Katniss. What lies ahead are mortal traps, dangerous enemies and moral choices that will ultimately determine the future of millions.

This is the movie we all hoped Mockingjay Part 1 would have been. If you haven't read the books then prepare for a very dark and emotionally heavy movie. There were a few parts that dragged, but there were lots of big action fight scenes.

This is a movie that is appreciated on the big screen. So if you've seen the first two (let's forget part 1) then it is worth a matinee price.