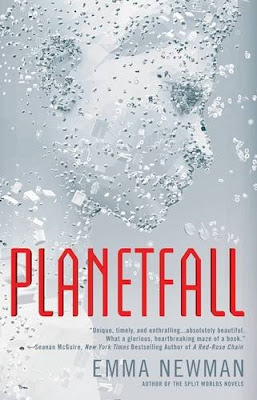 PLANETFALL
by Emma Newman
Roc Trade Paperback
336 pages
November 3, 2015Renata Ghali believed in Lee Suh-Mi’s vision of a world far beyond Earth, calling to humanity. A planet promising to reveal the truth about our place in the cosmos, untainted by overpopulation, pollution, and war. Ren believed in that vision enough to give up everything to follow Suh-Mi into the unknown.

More than twenty-two years have passed since Ren and the rest of the faithful braved the starry abyss and established a colony at the base of an enigmatic alien structure where Suh-Mi has since resided, alone. All that time, Ren has worked hard as the colony's 3-D printer engineer, creating the tools necessary for human survival in an alien environment, and harboring a devastating secret.

Ren continues to perpetuate the lie forming the foundation of the colony for the good of her fellow colonists, despite the personal cost. Then a stranger appears, far too young to have been part of the first planetfall, a man who bears a remarkable resemblance to Suh-Mi.

The truth Ren has concealed since planetfall can no longer be hidden. And its revelation might tear the colony apart…

“This heartbreaking adventure is a tragedy of science and faith.”

“Planetfall is a strange but mesmerizing book in which almost nothing is as it seems…Above all, this is a novel about the price of secrets.”
—RT Book Reviews
amazon

About the Author:
website-FB-twitter
Emma Newman is an author and a professional audiobook narrator, narrating short stories and novels in all genres. She also co-writes and hosts the Hugo nominated podcast “Tea and Jeopardy” which involves tea, cake, mild peril and singing chickens.

GIVEAWAY
a print copy of Planetfall (US only)