Mated in Mist is out in the world! What a long strange journey these worlds have taken me. I first started my writing career with the Redwood Pack series back in 2010. An Alpha's Path (Redwood Pack Book 1) released in Dec of 2011 and since then I've released 8 full books and 6 novellas in the series. And because I wanted to see what happened when I looked at different wolves, a different Pack in the world, I started the Talon Pack series.

Wicked Wolf started it all as a bridge between the Redwood Pack and Talon Pack worlds.

Tattered Loyalties was the book that changed the world I created irrevocably.

An Alpha's Choice was the book that broke me because of who the characters were.

Mated in Mist is the book that healed me...even if it broke me a little bit as well.

The journey the Brentwoods are taking within the Talon Pack has only just begun. There are some heavy hitters coming as well as a few surprises.

I cannot wait for you to read Mated in Mist. I hope you love it as much as I loved writing it. 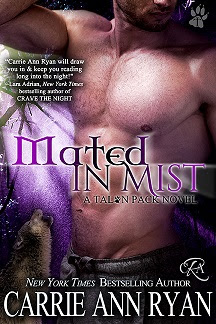 Print Length: 193 pages
The Talon Pack continues with an outcast witch and a wolf who can see past the darkness.

As Heir to the Talon Pack, Ryder Brentwood carries the responsibility of not only protecting his Pack, but ensuring its future. Only no one knows that as he does this, he must also shield his people from their past. When a witch with no ties bursts into his life, he must decide if he can overcome the depravity of his secrets and trust the one person who could break the fragile hold on his control.

Grieving over the loss of her twin and on the run from the unknown, Leah Helm knows she is far more alone than she thought possible. Her coven shunned her before she was born and the wolves she sought protection with are in a war of their own. When a wolf with a whisper of secrets is forced to work with her in order to protect their people, she finds she might not be so alone after all.

The world knows more than they ever have before about those shrouded in darkness, while Ryder and Leah are thrust into the center of a conflict they never should have been part of to begin with. On their journey they must not only fight those against them, but the burning temptation that is flaring between them. Fate might have paved their path, but that doesn’t mean they have to follow.


Excerpt:
“Is he staring?” Leah asked.

Charlotte’s eyes danced and she looked over Leah’s shoulder. “No, but he was earlier.”

So Ryder wasn’t looking at her, but he had been. That sounded about right. He kept changing his damn mind. First he’d pushed her away before he kissed her. Then he’d said he wouldn’t mate her, but damn well claimed her in the Coven meeting. She still wasn’t sure what that had meant or exactly what the others had thought, but it had meant something. She wasn’t Pack, but he’d still said she was his. Or, at least, theirs. It wasn’t as if she wanted to marry him and have his babies, but it would be nice if he would make his choice and stick to it.

She’d told herself years ago she wouldn’t have children and wouldn’t find a man to live her life with. She’d always thought her twin would be able to do that despite the danger, but that wasn’t for her. She hadn’t wanted her bloodline to continue with her, not with all the pain she’d lived with for so long.

But letting her hands run along that wolf’s body as they both panted with need wouldn’t be such a bad thing.

Her cheeks heated, and Charlotte raised a brow at her.

“Interesting place your thoughts went, I would think.” She smiled and her whole face brightened. The woman was absolutely beautiful, though there was a sadness in her eyes that she couldn’t quite hide. Leah knew what Bram saw in the woman, though he, like Ryder, did his best not to stare for too long.

If Leah had planned to stay within the den for any amount of time, she might have asked Charlotte what the story was behind that, but she couldn’t. She didn’t know her future and what path she would take. Therefore, making friends and promises wasn’t for her. It hadn’t been the case for more years than she cared to count.

About the Author:
Newsletter-FacebookTwitter: @CarrieAnnRyanInstagram-Goodreads-PinterestTumblr-Google Plus-Email
New York Times and USA Today Bestselling Author Carrie Ann Ryan never thought she’d be a writer. Not really. No, she loved math and science and even went on to graduate school in chemistry. Yes, she read as a kid and devoured teen fiction and Harry Potter, but it wasn’t until someone handed her a romance book in her late teens that she realized that there was something out there just for her. When another author suggested she use the voices in her head for good and not evil, The Redwood Pack and all her other stories were born.

Carrie Ann is a bestselling author of over twenty novels and novellas and has so much more on her mind (and on her spreadsheets *grins*) that she isn’t planning on giving up her dream anytime soon.
Sharon Stogner at 12:30 AM
Share